I’ve always loved traveling. I think I got bit by the travel bug early in my childhood when we visited Disney World for my 6th birthday. Ever since then I kept asking my parents where we would be going next and I secretly hoped it was a far away land like those I read about on my Grimm Brother’s fairytale collection.  As I got older I always found a way to travel or even better live somewhere abroad for longer periods of time. I signed up for every single school trip even if it meant going to a nature reserve I didn’t particularly care about, went on every outing offered by my Model UN team and went to a YMCA camp in Alabama when I was a tween (that, my friends, was a great cultural experience).  After traveling all over the US and most of the beach towns in Mexico I was craving for more.

As a teenager I studied abroad in West Vancouver and as soon as I got back I told my mom I wanted to move to Canada. That didn’t happen so I had to look for a new excuse to travel again. When I started college I signed up for a program where a year of study abroad was mandatory (yay!) and ended up moving to Clermont-Ferrand, France.  A small university town located in the midst of the volcanic region of Auvergne. Of course I back-packed all over Europe and slept in the best and worst conditions a hostel can offer a girl traveling by herself trying to visit as many countries with as little money possible. A three-month internship in Brussels later, I came back to Mexico longing for even more.

Fast-forward a few years later, I finish college, move to DC for my dream job, meet the love of my life, quit my dream job and move to Germany. I then started what I didn’t know at the time was my dream-life. I got to travel all over Europe, (again), but this time with my best friend by my side, and actually staying in hotels!

We then decided to add to our little family of two and made a baby in Germany who was manufactured with American and Mexican parts in Bangkok. As I held Evan in my arms I thought my life as a globetrotting woman had ended. I thought having a baby meant giving everything up, even worse, giving myself up. I learned that wasn’t the case. Evan has taught me so much about life and about myself and in his mere two years and a half of life he has taught me to see things under a different light.

This little man has over 10 stamps in his passport and about 70,000 air miles under his belt. As he keeps growing he teaches me that there is more to see that what the bare eyes can absorb and traveling, no matter what the circumstances are, is always enriching and fulfilling.

When I first started traveling by myself, I used to obsess and maniacally set up a schedule of the landmarks I was going to see, in which order and at what time of day to get the best view. Evan has taught me that naptime, play time and lunchtime can be done anywhere, anytime as long as you are enjoying what you are seeing. He has taught me that it takes time to actually appreciate everything and take it all in. I remember getting a bit annoyed when my then  18 month-old kept staring at a train at a museum for over 3 minutes, I thought he should see all the other things the museum had to offer but I later found out that all he wanted was to go back to that train and admire it. So observe, take a deep breath, take your time and let everything just sink in.

At least once. Evan will eat most anything. And probably spit it out, but at least will put everything in his mouth and keep in what he really likes. I must confess I’m not very daring when it comes to trying new foods. I’m not saying go ahead and get the most exotic meal on the menu (no, I don’t really want to eat fried bird bones) but at least be willing to try everything once. I recently discovered I really really like pickled Japanese food! I was so scared of trying all the sides when I was playing safe and ordering teriyaki chicken or a simple roll that I always left the sides for my husband to eat. I later discovered everything I had been missing. 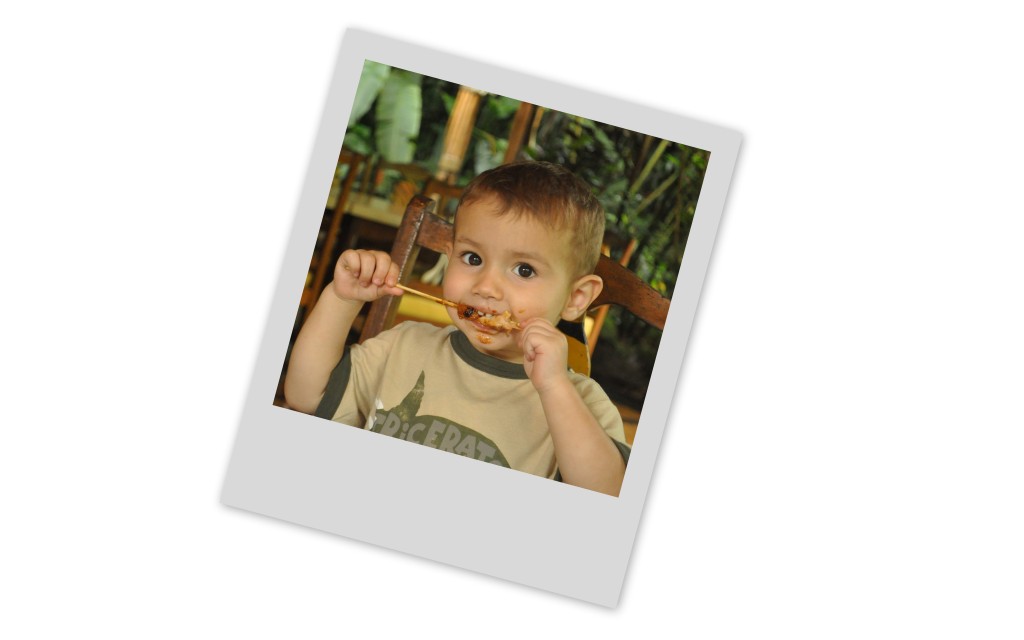 Evan gets excited about the simplest of things. He will be so joyful as he rides on a train, airplane, tuk-tuk or an elephant.  As I get anxious about the long plane ride ahead, Evan starts jumping up and down and looking at the airplanes outside the window. He loves to feel the breeze on his face as we ride on an open-aired boat or bus and doesn’t even think twice about running towards a statue and standing in awe of its size. Above all, he loves having mom, dad and baby Josh with him and will enjoy every second spent as a family.

Evan appreciates nature as he stops and acknowledges things we usually take for granted such as the little flowers on the sidewalk or the sounds of the chirping birds. What we see as just another giraffe at the zoo, Evan sees as a majestic animal that deserves to be admired.  He appreciates the little miracles of God’s creation as he sees a butterfly fly out of its cocoon or the waves of the ocean hit the rocks. What had become just another island to us, for Evan was a brand new adventure land to explore. 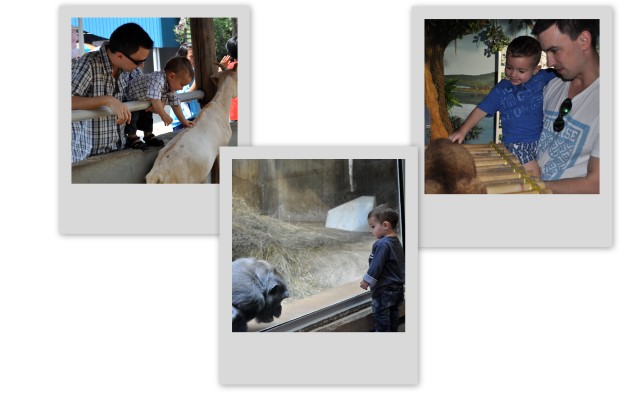 5. Interact with the locals.

His beaming smile always draws people in and he never leaves a place without making a new friend. Thanks to him we usually end up with the best inside scoop and travel trips and our experience is totally transformed as we see things from a different perspective.  Learning about a new culture and truly being immersed in the local life has been so enriching and mind-opening.

6. Only carry the essentials.

Every time I start packing for a new trip a little man comes into scene and removes half the stuff I’ve already packed. I usually have to hide the suitcase from him and pack in the stealth of my room. Nevertheless, he always makes sure he has his favorite blanket and pillow alongside a Sippy cup, a book and his favorite car in his backpack. He doesn’t care about clothes, diapers or shoes but always puts his dearest belongings in his own carry-on. A few times I’ve realized I’ve forgotten something at home, but Evan doesn’t fret. I’ve had to find “alternatives” to his usual snacks or toys and Evan will happily try new things and find new things to entertain himself with. 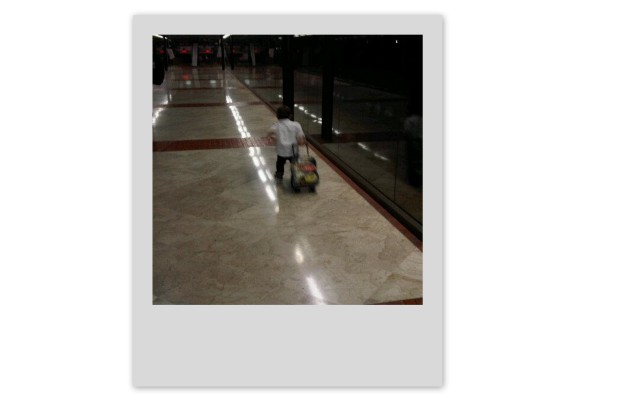 7. Know when to stop and relax.

I’ve always had the tendency to put more on my plate than I can handle. I have a very busy schedule all the time and rarely give myself time to stop and wind down. The same happens when I travel. I want to see every single thing on the tourist guides and will walk until my feet are sore and I’ve seen the last statue on the book. Evan has taught me that even the most exciting places will still be there tomorrow and that it’s important to take a break and recharge our batteries. 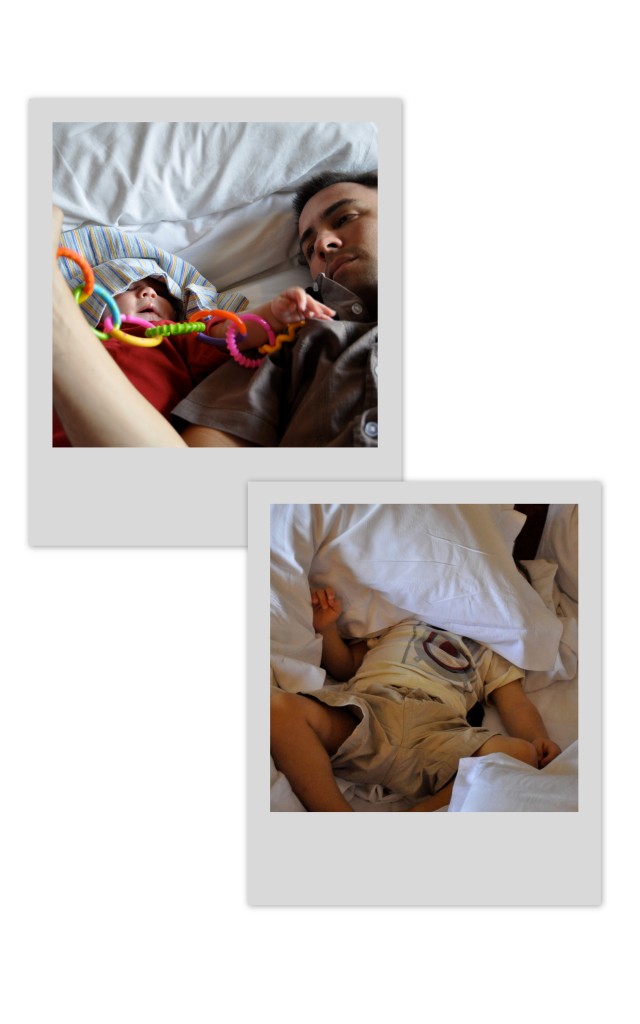 What have your children taught you about travel?

18 thoughts on “Meaningful Travel: 7 Lessons my Toddler has Taught me in his 2½ Years of Travel”