After reading about Taco Local on my good friend Kaho’s blog I knew I had to make an effort to venture to the South Side (picture me saying that with hand gesture that obviously gives me street cred) and try it myself. After all, the Mexican in me needed its monthly taco fix and the lack of motivation on my part to make them from scratch drew me closer to ignoring the commute and just going there.

Taco Local is located close to Blok M in the hipster-laden area housed by the streets of Panglima Polim. I had heard about the area from a while back but since I’m not SS (South Side), I wasn’t really aware of where it was. After a couple of befuddled laps around the neighborhood we arrived at number 38 of Jl. Panglima Polim V.

My first impression is that it looked just like a taqueria. Stools, wall-set bar tables and all. It felt like a nicer version of an authentic Mexican taco-spot considering the stools were actually not falling apart and the tables were not metal and didn’t promote Coca-Cola or Carta Blanca on them. I could call it Taco-Chic, since they definitely have several Mexican elements such as the papel picado banners and the chalkboard menu. You can tell, however, that there was a lot of thought put into the design and setup of this little piece of taco paradise. 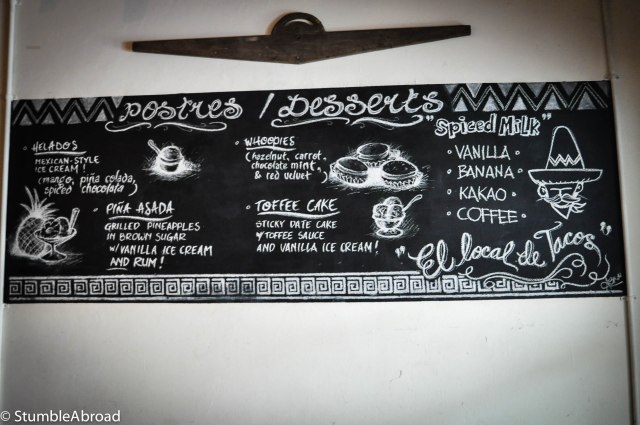 After looking at the menu, we approached the counter and made our order. Again, I felt like I was back in Mexico ordering right from the kitchen. I appreciated the excellent service and looking at the guys working hard on making beautifully fresh tacos.

Ok, so it looks cool but please tell us about the food, now!

The food is all it says it is. Fresh. flavorful and above all authentic. I would definitely say the food at taco local is Mexican and not Tex-Mex! I was very excited to see so many traditional Mexican dishes on the menu. From tongue and tripa tacos to pork al pastor tacos I don’t think I’ve seen such a wide variety of taco fillings since I arrived in South East Asia almost 4 years ago.

We started our meal with the taco local nachos. They didn’t disappoint. The fresh salsa, warm beans, chewy cheese and crisp tortilla chips made for a perfect bite. I was not able to take any pictures of the nachos because we munched at the speed of taco eating contestants and by the time I even thought of taking a picture there was nothing but a few cilantro leaves left.

My friend Heidi ordered the tacos with pulled beef and elote and really enjoyed them. The corn was perfectly grilled and the cilantro leaves where the perfect ending touch.

Personally I opted for the pork tacos al pastor. When meats are prepared “al pastor” they are slowly braised in an adobe concoction that is similar to the one used for chipotle chilies. Taco Local’s version was not only delectable but the pork was perfectly tender inside and deliciously crisp outside. The taco even included grilled pineapple and a green salsa, it doesn’t get any more authentic than that!

My only issue with the tacos was that they started falling apart on me! Since the tacos were pre-prepared for you and they were already showered in salsa I didn’t have much time to chomp them down. Or maybe my technique was just not the right one. I should have followed the signs that aptly illustrated the perfect taco-munching technique. 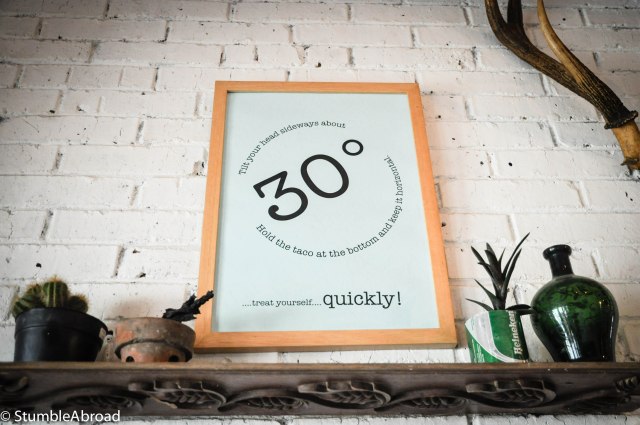 How to hold a taco

Taco Local is a hidden gem in the midst of an overly franchised and commercialized Jakarta. I was so delighted to find a place that thrives on real flavors and fresh ingredients. I was also very pleased with the incorporation of Indonesian spices and flavors in the menu. I can say that Indonesian spices and Mexican flavors go hand in hand. Overall this was an awesome flavor experience and I cant’ wait to go back and give their margaritas a try.