As I have mentioned many a time before, Jakarta life can get quite crazy and hectic once in a while. Escaping the vida loca is not only entertaining but sometimes necessary to keep sane in this  bustling city. One of our favorite quick escapes is visiting Puncak and one of our favorite activities there other than visiting the tea plantations and flower gardens is visiting Taman Safari. As the name indicates, Taman Safari is a safari park which can be driven thru and animals can come as close to you as you allow them to.

We have visited Taman Safari several times and I won’t bore you with the details of the Safari ride itself, although every time we visit it the boys enjoy it more and more. On our last visit Evan carried the camera his abuela got him for his birthday and started shooting away. Of course he got startled to see the animals so close to him but he kept shooting away. I will have to post the pictures he took soon because many of them were quite good! 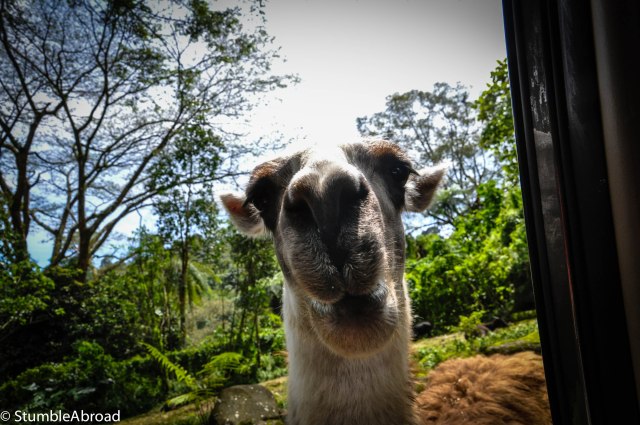 but then this happened

Once the Safari ride is over, there are many areas to play in including a water park, amusement rides, animal rides and Baby Zoo where you can take pictures with different animals by paying a nominal fee. Evan was very eager to ride on all the animals available so we paid the 15,000 Rp. for him to ride a cute pony. When he saw the camel he insisted on riding it, too and for 15,000 Rp. per person Evan and my sister rode the camel. He then decided he wanted to ride on the Elephant but I thought the 250,000 Rp. fee per person was too expensive seeing that he had already ridden an elephant in Thailand, even if he didn’t remember. When the time came to take some pictures with a baby orangutan I was surprised to see Evan so keen to do it. He just marched into the photo area, sat down and let the orangutan hug him. He even started kissing it. It was an incredible experience and to be honest my heart was just melting seeing by little boy acting so brave and grown up. 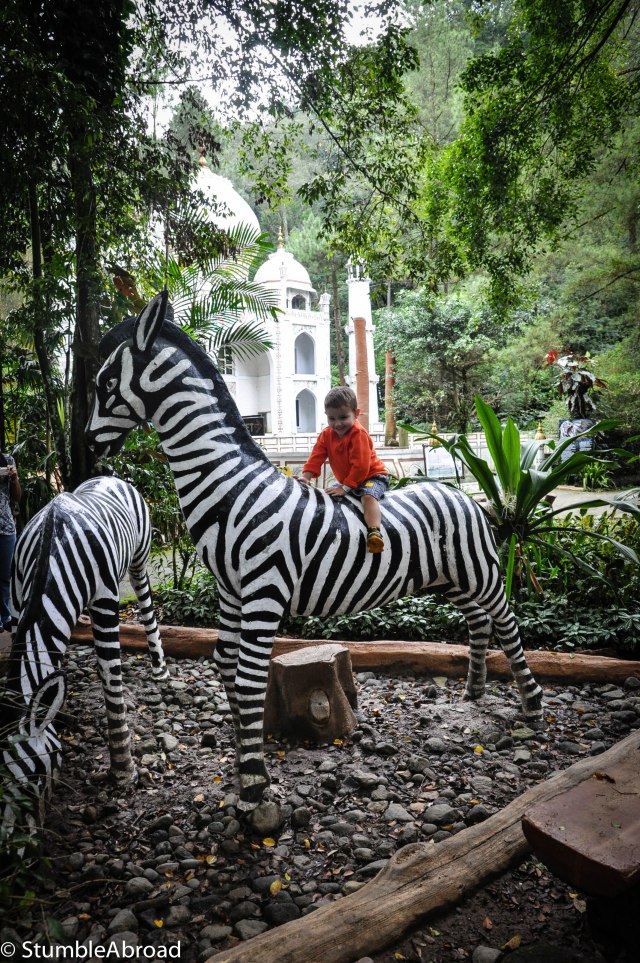 He insisted on riding the (fake) Zebra 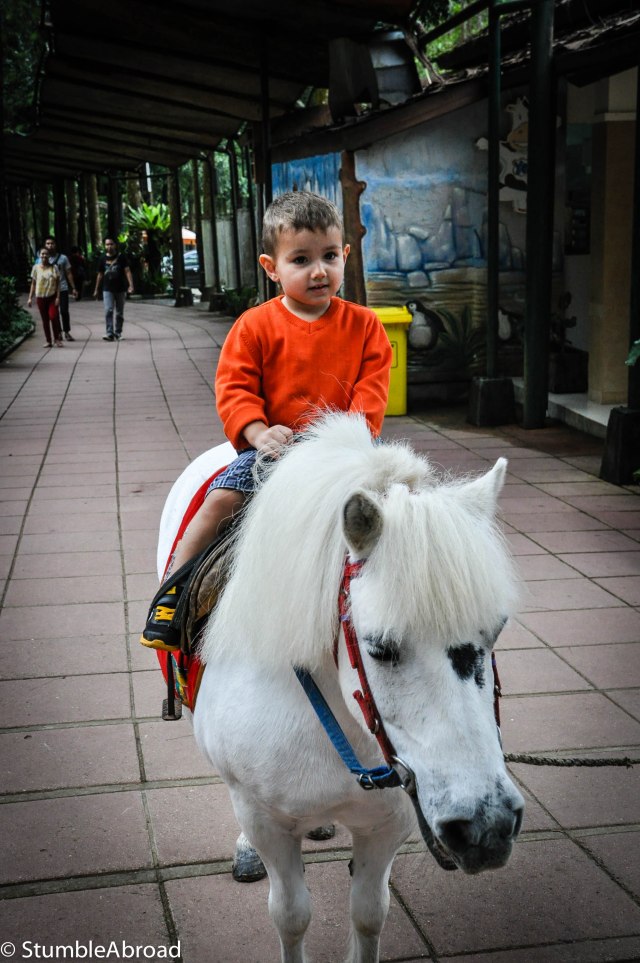 Evan taking a picture of tigers

He found a new friend 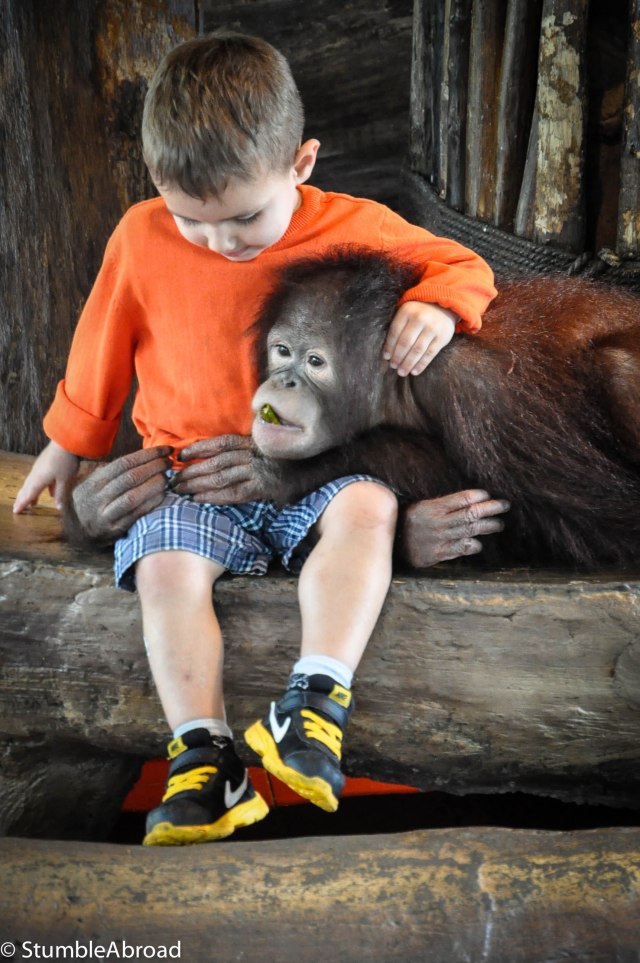 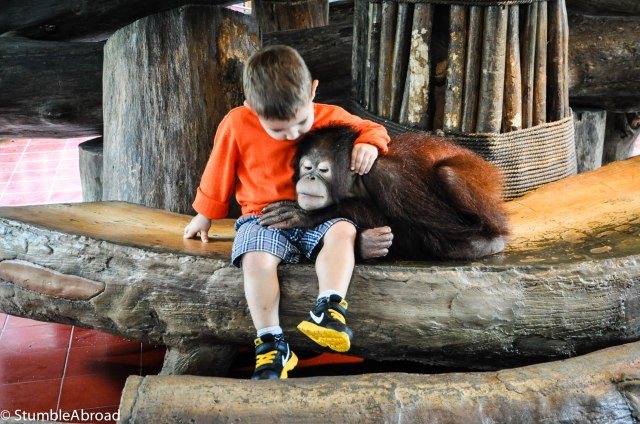 I think that was a kiss

Evidently, Taman Safari is a great place for kids of all ages and I had already written about that, so you might wonder what made me write a new post about Taman Safari. The reason is simple: Penguins. Cute, cuddly, gentle and friendly penguins that you can feed and caress and have a blast with.

On our previous visit to Taman Safari I had noticed that they had a penguin feeding activity at the Penguin exhibit. Last time we got there too late and I didn’t have the opportunity to check it out. I was a bit upset but thought I would have another chance to do it. On our last visit I made it my purpose to get there before closing time and pay a visit to these adorable creatures.

Looking at the penguins swim

They had three different feeding programs. The cheapest one was 20,000 Rp. and the most expensive one was 100,000 Rp. I really don’t know what the cheaper packages entailed but package “A” which cost 100,000 Rp. for two people involved getting close to them and feeding them face to face.

As soon as we approached the penguin habitat we were greeted by their keeper; a very kind young man who spoke excellent English. We were asked to wash our hands and leave some of our belongings on a secure area behind the exhibit. As soon as we got in the penguins knew what we were there to do. We were gently approached by the cuties as the keeper taught us how to feed them. Evan was ecstatic to be inside the exhibit as the rocks and slides were the perfect playground for a toddler.

We were given a nicely sized tray of fish which included a few big ones and lots of tiny fish. I thought Evan was going to be hesitant to touch it but we ventured right into the experience and was excited to see the penguins come close to him. 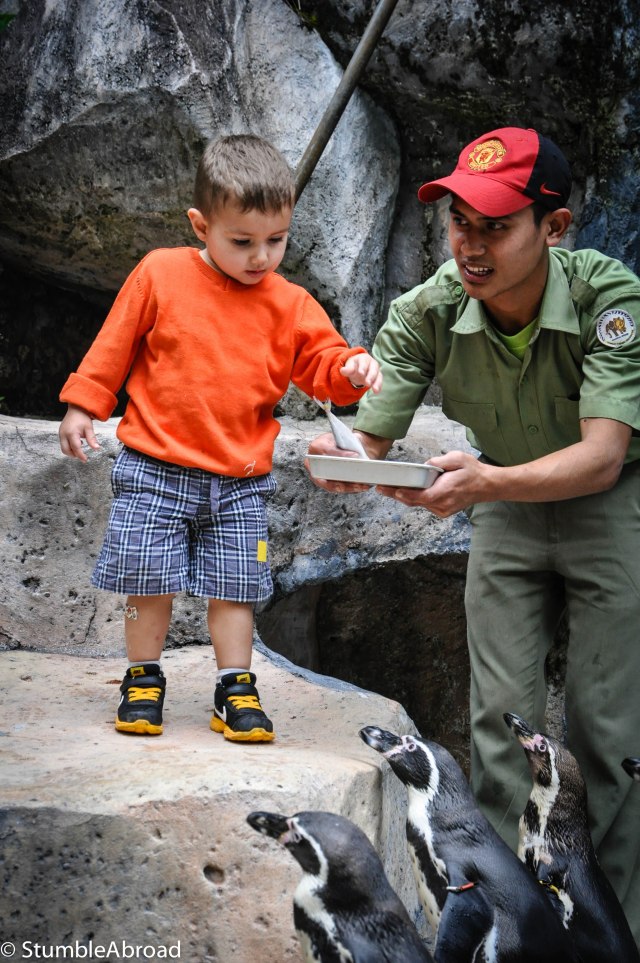 I was so impressed to see how brave he was

Evan was so excited

These cute little birdies were very gentle and friendly, however manners aren’t their specialty and as they munched their fish tiny particles flew all over the place and landed all over our clothes. We didn’t mind and since the fish were cold they didn’t really stink at all.

They were so cute and cuddly 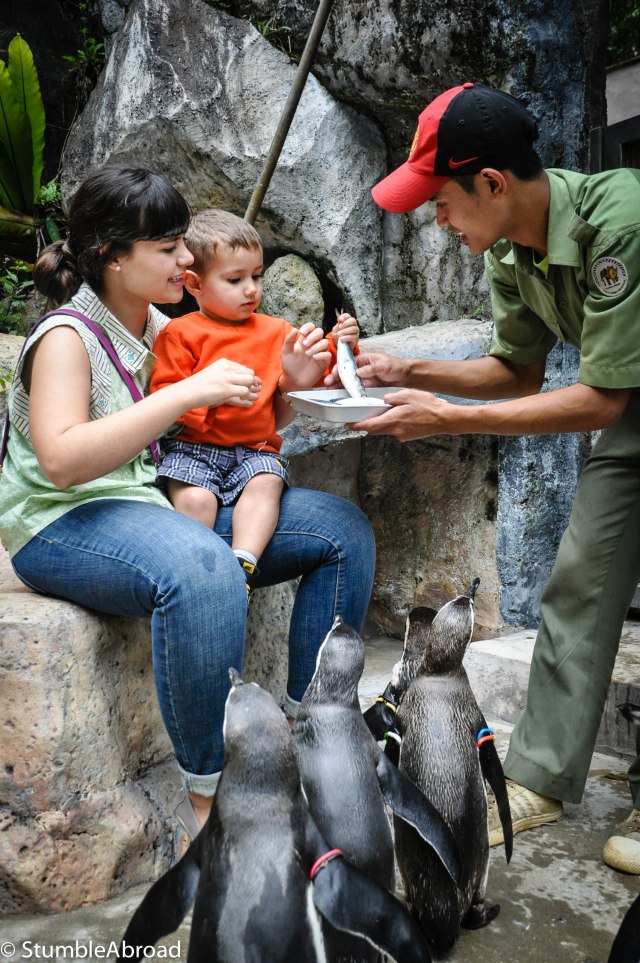 Learning how to feed them

Evan was very attentive to what the keeper was telling him. He even realized that Penguins don’t eat bananas or carrots like the monkeys and zebras at the Safari do. I was so amazed at his level of comprehension and was very grateful to be able to share these kind of experiences with him.

They are so gentle

I still can’t believe we were able to get so close to them. This was by far my favorite experience in Indonesia. Sure hugging orangutans and riding elephants was fun but getting close to these majestic creatures was a once in a lifetime ordeal.I cannot recommend the penguin encounter at Taman Safari enough. It is an incredible experience for kids and adults that will teach little ones about our Eco-system and the importance of caring for animals.