One of the things I miss the most while in Jakarta is parks. The trees, the healthy birds and animals, the smell of fresh air. Don’t get me wrong, I’m totally obsessed with the amazing indoor playgrounds Jakarta has to offer and the awesome shopping centers and kid’s entertainment options. However, a nice outdoor area for the kids to roam around freely is sadly a rare sight. When we get a chance we head to Puncak to catch a breath of fresh air and we cherish the moments we spend outdoors. It has become our tradition to seek a a park or two every time we travel and Kuala Lumpur did not disappoint.

Not sure were to start we started doing some research only to find that Kuala Lumpur had a huge array of outdoor recrational spots and we didn’t even know where to start. As soon as we mentioned to some friends that we were going to visit KL, the first thing out of their mouth was “visit the bird park”. To be honest I’m not a huge fan of feathered creatures but for what I thought was the sake of the kids we decided to give it a try. A quick 10 minute drive from the KL city center we arrived in a a vast precinct covered by gardens. Our driver suggested we not only try the bird park but the deer park that laid nearby as well as the butterfly and orchid gardens.

Armed with a stroller, a couple of sippy cups, a lot of seaweed snacks and the realization that it was going to be a hot and sunny day in KL we entered the world’s largest free-flight walk-in aviary. After paying the entrance fee of  48 RM per adult and 38 RM per child aged 3 years and older, we were ready to do some bird-watching.

Josh was ready to start the day!

At the Park Entrance

Joshua was eager to go in.

At first sight the birds seemed content and didn’t even mind the human intruders. Within 3 minutes and 20 meters of entering the premises we had already sighted over 20 free-roaming birds. Evan and Josh were mesmerized by the fluttering wings. They were singing, chirping and humming and so were the birds. The birds were so happy and healthy and it was a watching them was a wonderful experience. 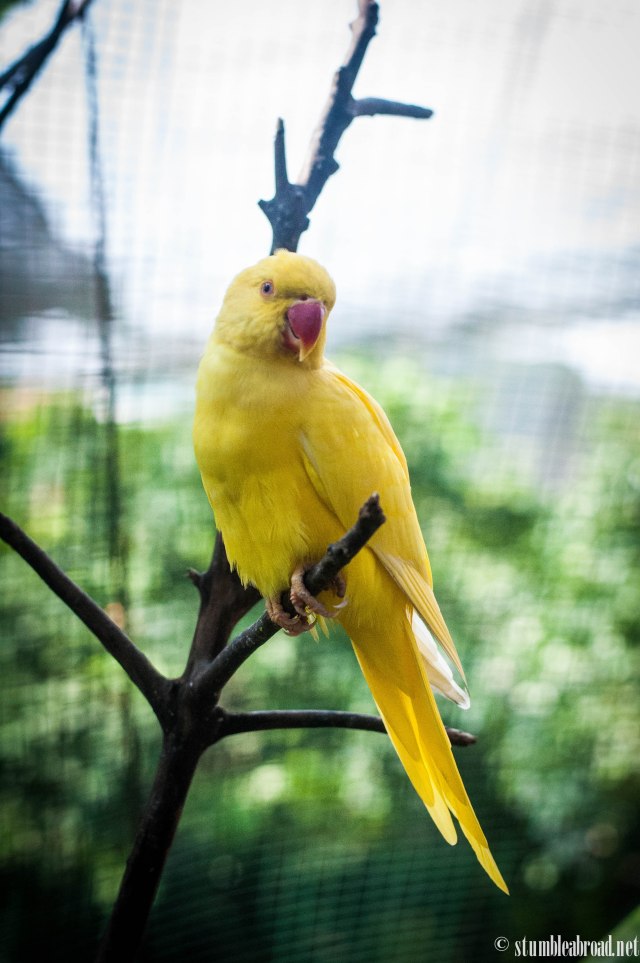 The information on the displays was very legible and accurate and it was both in English and Malay. It was very impressive to see so many birds from so many different parts of the world all in one spot. Food vending machines were available every few meters and we were disappointed that we didn’t have coins to get some food to feed the birds.

Reading about the birdies

The boys were so excited to see so many animals in one place and squealed of joy when they say fish in a pond. Hearing Joshua utter one of his first words “fissssshhhhhhhhh” was a delightful sound that I will never forget. He certainly loves to watch them swim around near our home in Jakarta and seeing so many together just made his day.

Birds of all colors, plumage and sizes flew and waddled around us. Evan was excited to watch them eat and started asking his newly favored question of “But, why????”. Dada patiently answered as many questions as he could and eventfully gave up and asked Evan the same question. 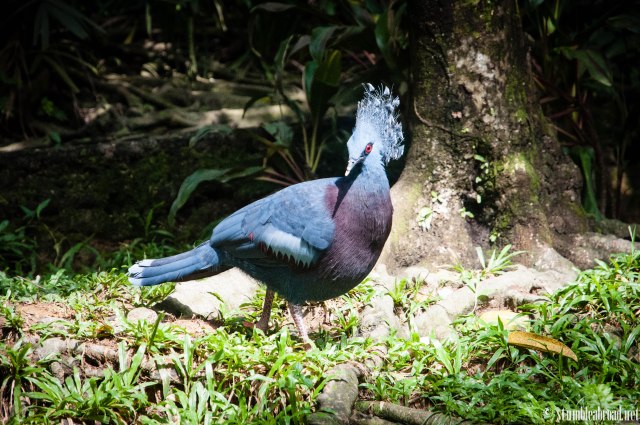 This bird was very beautiful.

There are several opportunities for photo ops throughout the park. Evan, who lately has been saying that he is just SuperMan, braved up and allowed one of the caretakers to put a bird on his arm. Fast forward a few seconds and the bird almost flew away after Evan screamed and moved his arm away claiming that the bird was biting him. In fact it was just the bird’s claws digging a bit into his skin but it was just too much to bear. As evidenced below…

Holding the Birds. Ok, let’s do it! 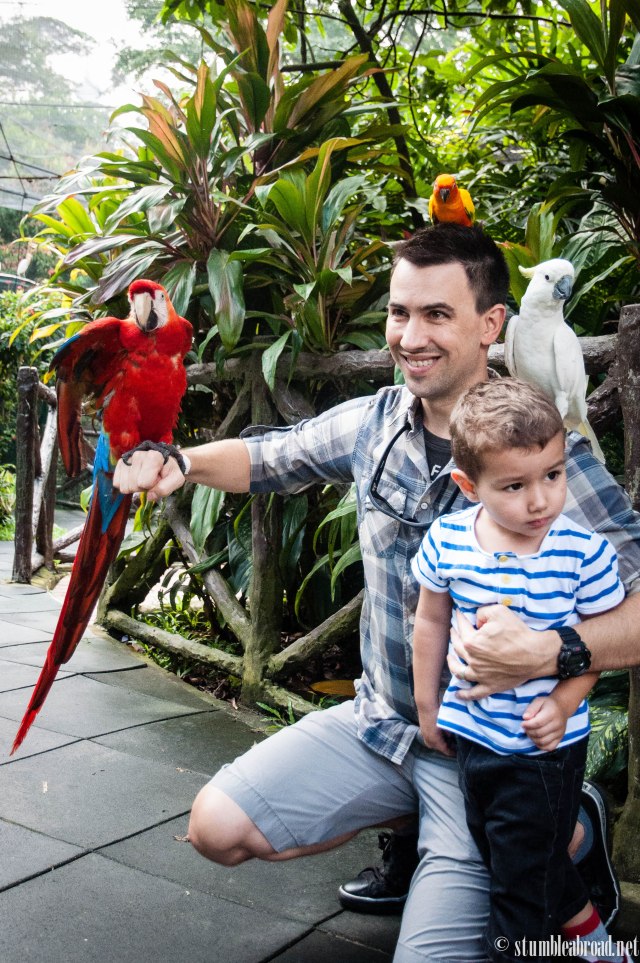 Evan wasn’t too sure he was into this.

Bird-clawing incident forgotten, we continued our promenade and collected souvenirs along the way. We then reached the Waterfall Aviary where we witnessed the grandeur of the Malaysian Milky Storks and realized that the heat was getting to the boys. So, after about an hour and a half at the aviary, we were ready to catch a ride back to the hotel to take a break and cool down at the pool.

I have two feathers! 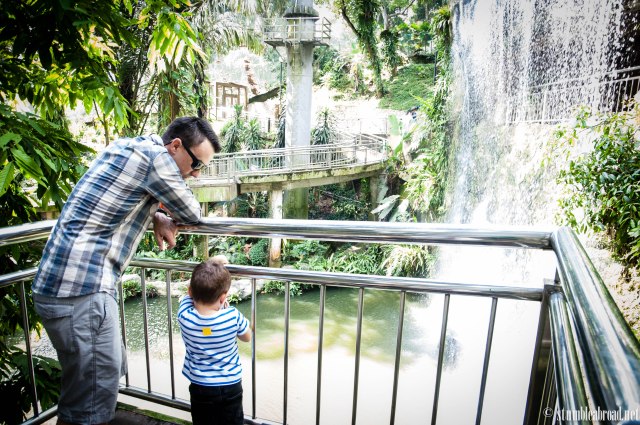 Looking at the waterfall

As we were exiting the aviary, a little someone spotted a little something that sparkled that little someone’s curiosity. They had found their man-made oasis, a playground in the middle of all the lush greenery. Tired and sweaty little faces turned into cheerful and sweaty little faces bright with glee. This playground was one of safest and cleanest I’ve seen in Asia and I was very happy to see Evan and Josh roam free like little birds all over the playground. I was surprised to see Josh gather up courage and go in the big kid area and Evan climb up all the way to the highest slide.

We found a playground!

Evan was quick to climb on it!

Joshua was there soon after. 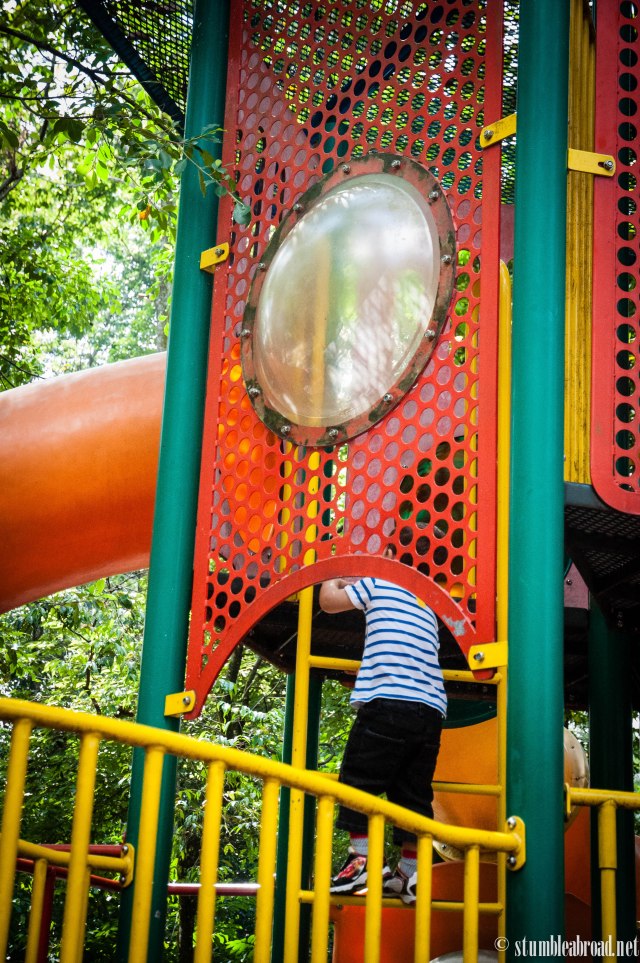 Evan was a pro climbing the ladders and going down the slide. 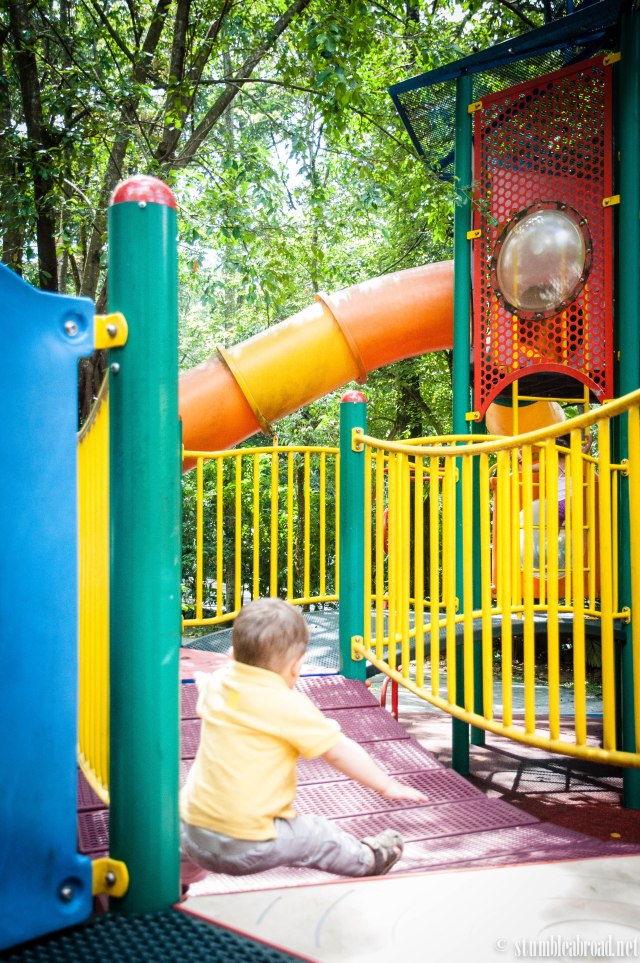 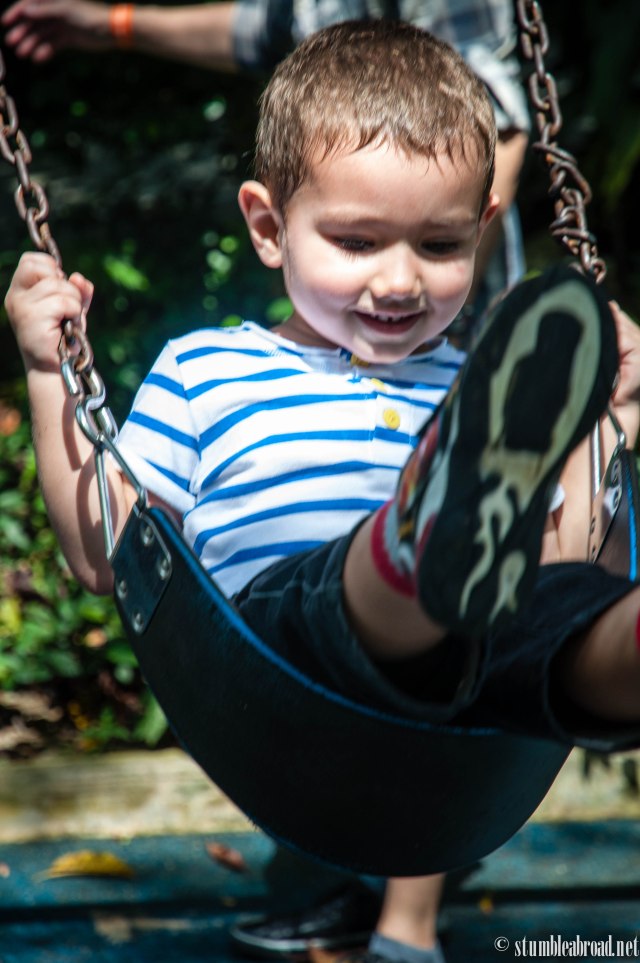 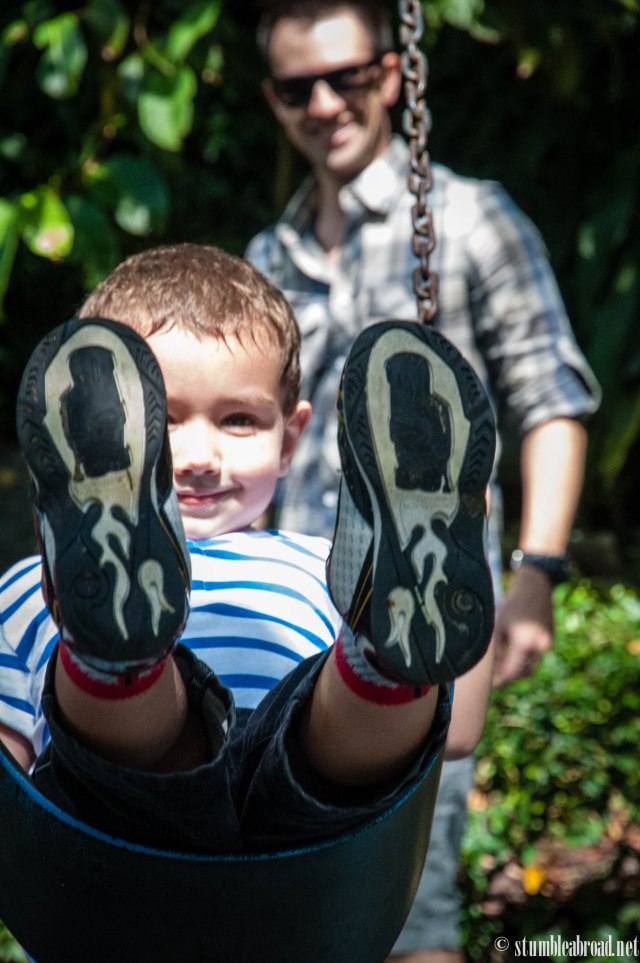 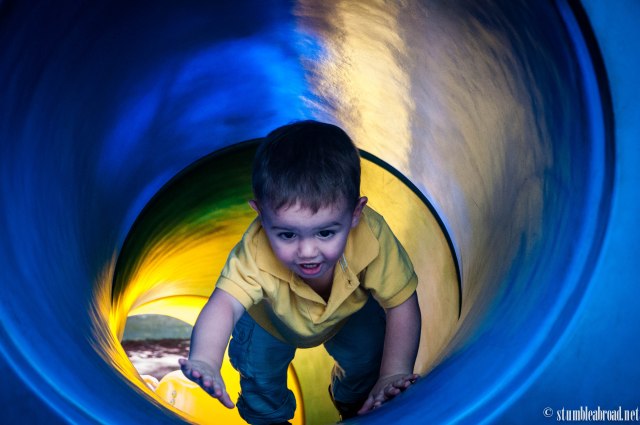 After the storm comes the calm and the kiddos were ready to go back for good. Again, we had to detour to the hatching station where Evan was impressed to see chicks (the bird kind) come out of their eggs. An incubator and a couple dozen baby chicks were on display and Evan loved watching them.

Looking at the baby chicks. 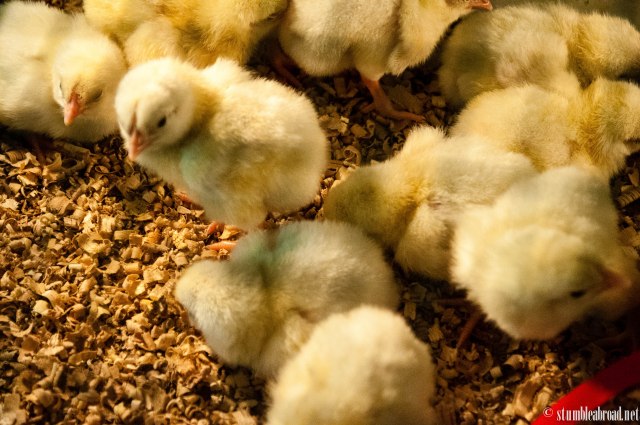 Eggs in the incubator.

Our last stop before we finally exited this amazing park was at the Ostrich feeding station. A case of leaves was available for anyone to grab and feed to these humongous birds who were eagerly awaiting a passerby to offer them a treat. Evan was so brave and decided to feed the ostriches himself not without first relying on dada to lift him high enough to be able to feed them.

Ready to feed the ostriches.

Everyone was eager to feed them.

Whoa! He was hungry!

Overall a wonderful visit as evidenced by the smiles on the boys faces after a long sunny morning at the park. If you are in KL don’t miss out on the Bird Park. It is a beautiful manicured aviary that will make your heart chirp a new song.