Growing up in Monterrey I would get super excited whenever we had the opportunity to visit Mexico City. Although I was born in DF (Distrito Federal, aka Mexico City) we moved to Monterrey when I was 5 years old and every opportunity we had to visit DF we would seize. As a teenager I found every excuse I could find to visit DF whether it was a Model UN, a church retreat or just paying a visit to a friend.

One of my most cherished memories of Mexico City was that of me and my sister visiting the Children’s Museum in Mexico City. Years later I would visit it again with my tween friends and despite the fact we thought we were too cool for it we had a blast playing in the amazing interactive museum.

When we started planning our summer vacation and decided to visit Mexico City I knew right away that I would without a doubt take Evan and Josh to the Papalote Children’s Museum in DF. I started daydreaming of the fun they would have there and soon after the time came when it was time to finally visit the museum.

After checking out the museum’s website I had an idea of what kind of ticket I was going to purchase and although I could have bought the tickets online I decided against it. We arrived at the museum ready to pay for the Family Package which included museum access and two movies for four people for a slightly lower price than if bought individually. Children under two do not have to pay to go in the museum so with the Family Package we were able to cover the entrance for the five of us since we were lucky to have my dad with us.

When we first came in the kids were overwhelmed and didn’t even know where to start. The place was almost empty since the school holidays had just finished a week before and it seemed like we had the whole museum to ourselves. This was an extremely different experience than every single time I had visited the museum before and I was thrilled that the boys could enjoy each and every exhibition without waiting in line.

I had been so eager to arrive early that we didn’t even have breakfast. Gratefully, when we arrived, we found a delicious El Globo pastry shop  within the museum ready to satiate our dire need for caffeine and some nourishing pastries (conchas anyone???).

The day was a bit gray and it seemed like rain was imminent so we decided to hit the outdoor area first. The playground was divided by age groups which was fantastic since the toddler area was the perfect size for Evan and Josh. I really loved watching the boys learn about physics in the science area. Without even realizing it they were learning about action and reaction and were greeted by a wonderful “cuate” or friend who helped them in every section of the playground.

Outdoor 5 and under area

Right by the playground is the Bubble Play area. If you have seen pictures of kids “inside” a giant bubble, this is the place where the magic happens. Every time I have visited the Papalote I have had to wait in line for at least half an hour to get into the widely acclaimed bubble play area. We were so lucky to be able to go right in and stay there as long a we wished for. Or at least until the boys were too wet to play comfortably. More friendly cuates greeted us as we entered this bubble paradise. Bubbles abounded and the fun was unstoppable. Evan loved blowing his own bubbles and Josh made a huge effort to make bubbles himself but ended up soaked in glycerin filled liquid. Josh even decided to clean his shoes and stepped into the bubble formula after he was surrounded by a bubble. 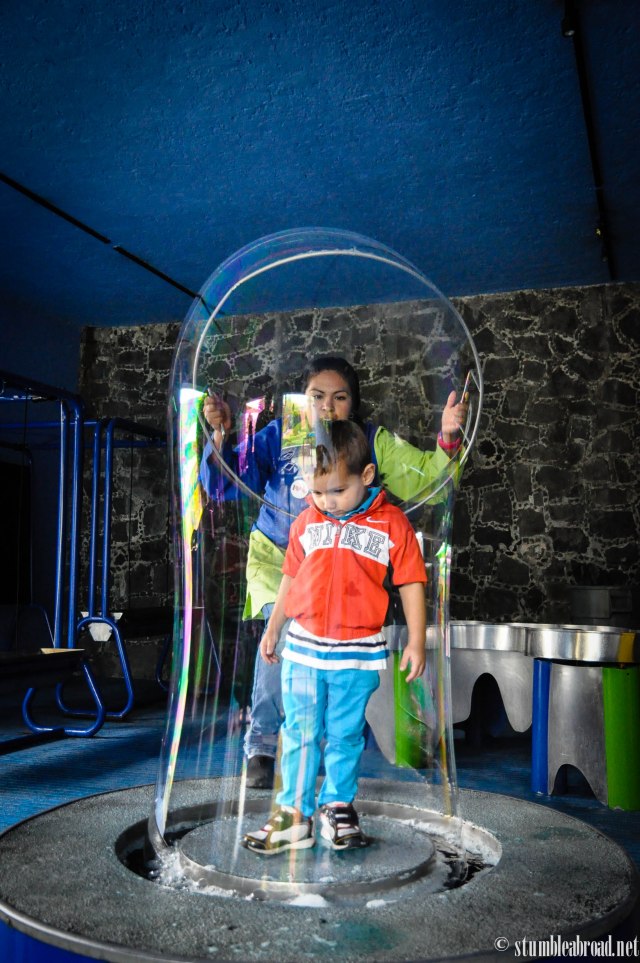 The bubble section was fantastic

He loooved popping the bubbles

Josh jumped right in, too

He ended up stepping in the soap! 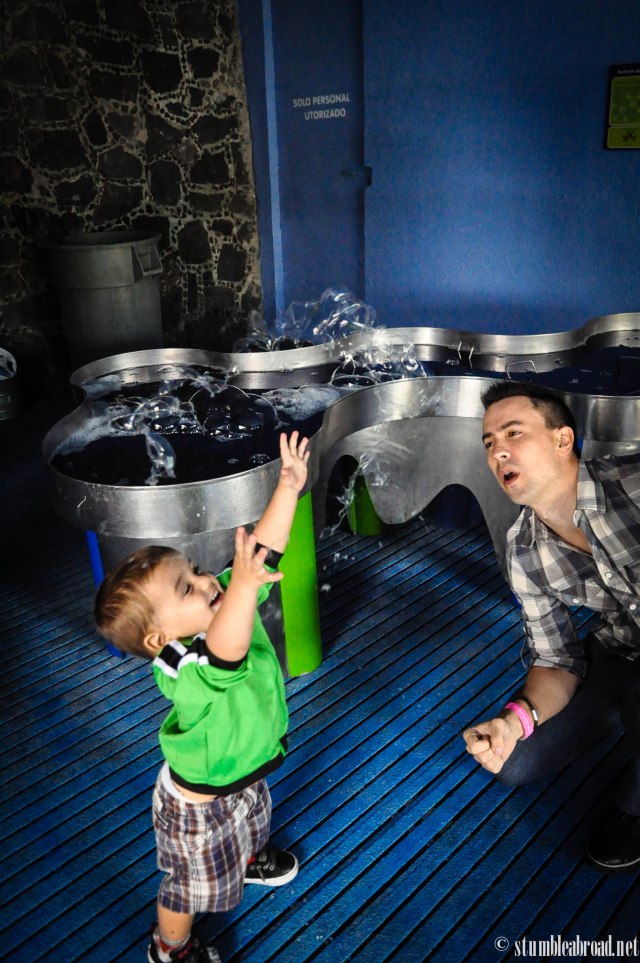 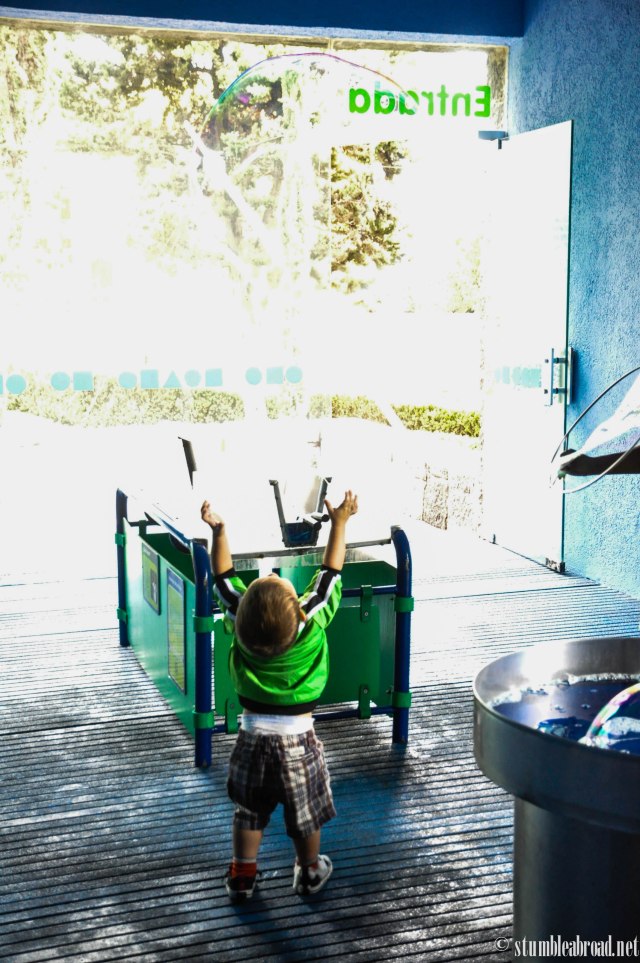 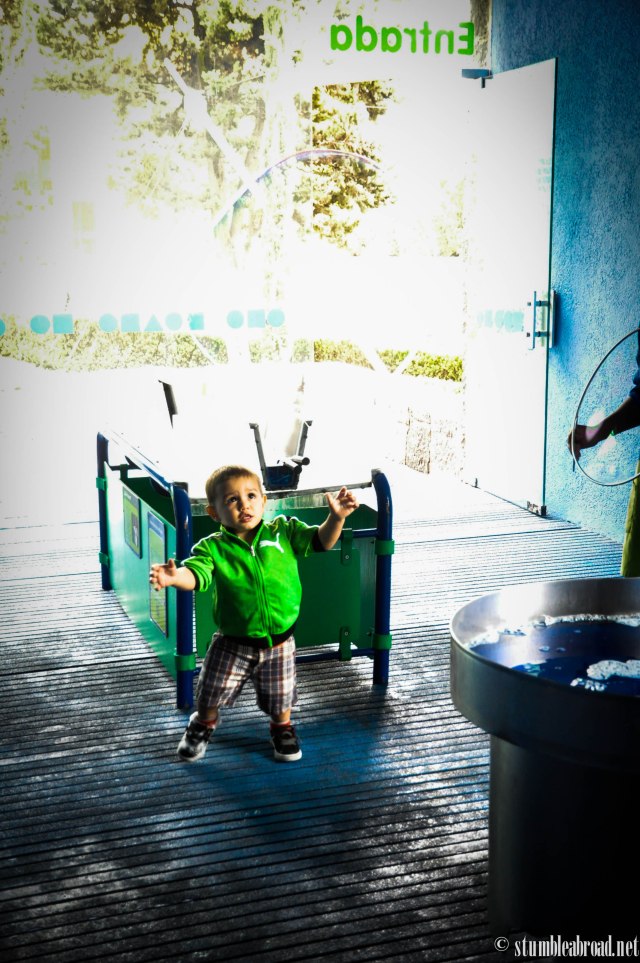 The Papalote often has special temporary exhibitions and on this occasion it was a traditional Mexican children’s game area which had giant versions of all the games I used to play with growing up. I was so excited to see this and enjoyed watching the boys playing in the toddler designated area.

We then watched an amazing 3-D IMAX movie in the IMAX screen about wild animals. The boys liked it but got a bit bored of wearing the 3-D glasses and Josh started getting rowdy towards the end. By then we were ready for a break and headed over to the food court area. After perusing the wide variety of options including a fresh juices and sandwich shop, a domino’s pizza and I don’t even remember what else, the boys enjoyed eating McDonald’s and I went for my traditional tacos al pastor. The boys decided they wanted to have tacos too so we ended up ordering a few extra tacos for the boys to eat.

After our short break we headed over to the Digital Dome. At the Digital Dome we watched a super kind friendly Sesame Street Show about the stars and planets which the boys enjoyed thoroughly. Josh was amazed by the huge screen and loved seeing big bird go from one edge of the screen to the other almost instantly.

Star-strucked as we were we moved on to the different sections of the museum. We found that every few meters there was a special area for itsy bitsy ones. This was so fantastic since some of the activities were a bit too advanced for Evan and Josh considering they were expected to read clues to find things or put together puzzles designed for older kids.

Another 5 and under area 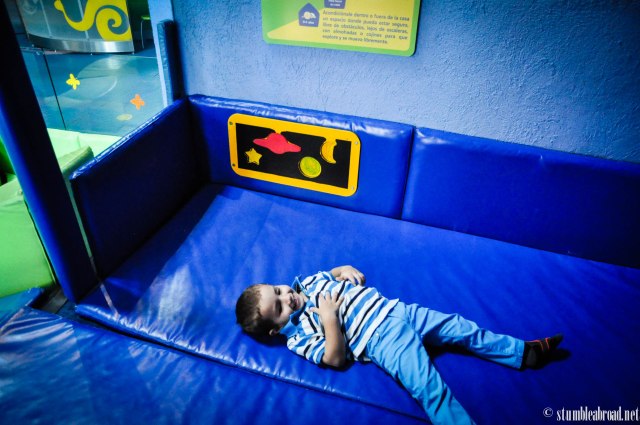 As we continued our incessant trek through the hallways of the museum we stumbled upon a lego play area. You can guess who wanted to stay there for hours. Evan played and created a couple of houses and had a blast playing with the cuates running the lego center. 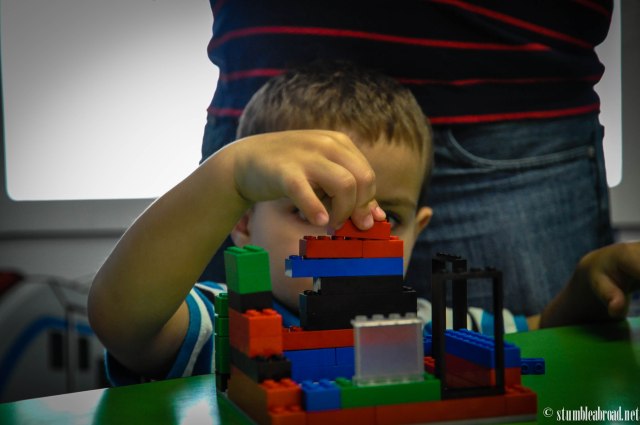 The further we explored the museum the more fun the boys had. We arrived in a physical challenge area where Josh was a pro at running on the human-size hamster wheel and Evan was intent on walking along with his daddy on some sort of plank creation. Evan had a blast chasing his shadow around and even enjoyed making a still picture movie that ended up having his hand in the scene more often than not. 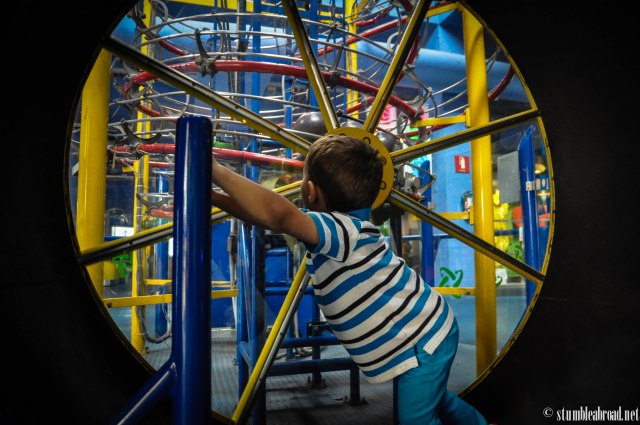 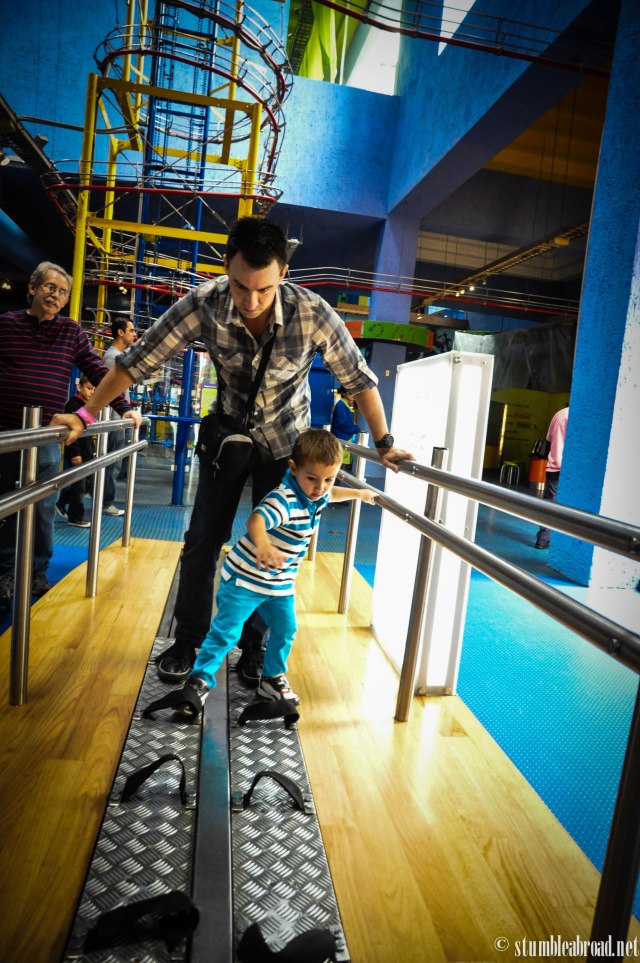 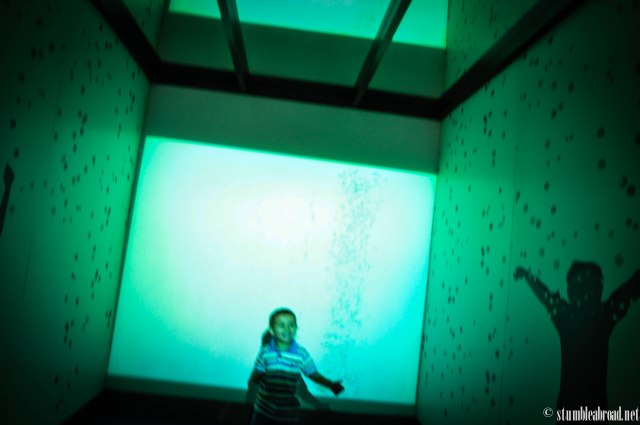 Evan playing with his own shadow

Evan’s favorite section was the transit school where cuates taught kids how to follow pedestrian rules and how to follow traffic directions. Evan loved putting his skills into practice and riding the ride-on toys available while stopping on the stop-lights and allowing pedestrians walk by.

The boys started getting tired but that didn’t stop them from being willing to explore the second floor of the museum. Evan played in a radio station and we listened to phone conversations from places all over the world. We were even able to listen to some bahasa and were able to catch a few words here and there. Evan’s favorite activity, however, was the nail bed where he bravely made shapes over and over again. Evan had so much fun doing this that he tried it about 4 times.

Evan looking at his work of art on the nail bed

Overall this was a fun and didactic visit that we all enjoyed. I would go back in a heartbeat and I hope to do so when the kids get older and are able to enjoy even more sections of this amazing museum. If you are unsure whether it is worth it, don’t be. It is so much fun and is definitely worth a day or at least half a day. I can’t wait to go back.