Last weekend as a spur of the moment thing we decided to head over to the nearby city of Bandung. We had never been there before and overall had heard good review of the activities available in the once preferred spot for international conferences during President Soekarno’s rule. We jumped in a train (that’s right, a train, more on that later) and headed up the 768 meters above sea level in a quest to find cooler weather and hopefully a good time.

With the help of the old faithful internet we had an idea of the places we wanted to visit. We arrived Saturday at noon and wanted to head immediately to the only place my hubby cared about visiting, the Geology Museum. After all, the boys are currently obsessed with dinosaurs and it seemed like this museum would be able to pique their curiosity with their small fossil collection. After doing some Iphone research we found out the Museum was closing at 3:00 PM and if we wanted to have lunch and figure out how to get there this was just not going to roll. So we postponed our visit to the following day.

Sunday morning we had breakfast and headed to the concierge in our hotel. We heard different opinions regarding whether we should walk, take a taxi or do neither. Sunday is car free day and getting to the museum, or anywhere for that matter can be more challenging than fun. We decided against walking and decided to test our luck and head to the museum on a cab nonetheless. The short ride there was smooth as silk until we got to the street where the museum is located. Apparently on Sundays the whole street becomes a street market where miles and miles, or should I say kilometers and kilometers of vendors set up their booths and offer goods that range from factory seconds to flip-flops, nasi campur, and a few random knickknacks.

Street Shopping in front of the Museum

We were finally able to go thru the mounds of stalls and people and finally got to the museum. From the outside it seemed extremely well maintained and in fact like what a geology museum should look like, oil pumps and giant rocks decorated the exterior courtyards. A very small but cute souvenir shop/ ticket booth laid beside the entrance. We got our tickets, Rp. 10,000 per person (what a bargain). Baby Josh who isn’t a baby anymore didn’t have to pay and we were happy about that. 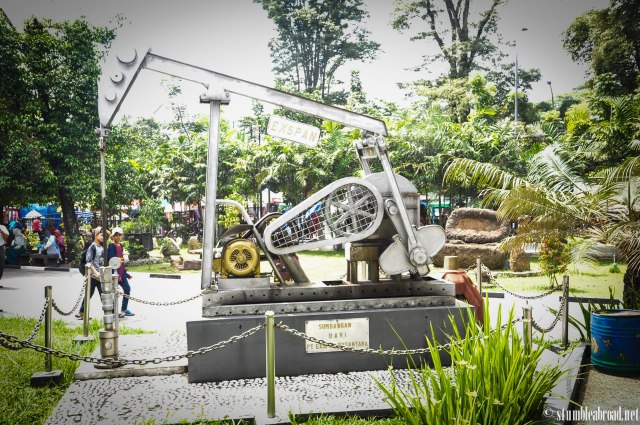 As we entered Evan got in Evan mode and starting jumping around and pointing at everything around him. Josh tried to perform his escape artist act and unbuckle himself from the stroller but we stopped the catastrophe right on time. You see, toddlers and fragile rocks and artifacts don’t mix, particularly when there isn’t anything but a rope between the visitors and the very valuable things on display.

Evan is the man, the ticket man 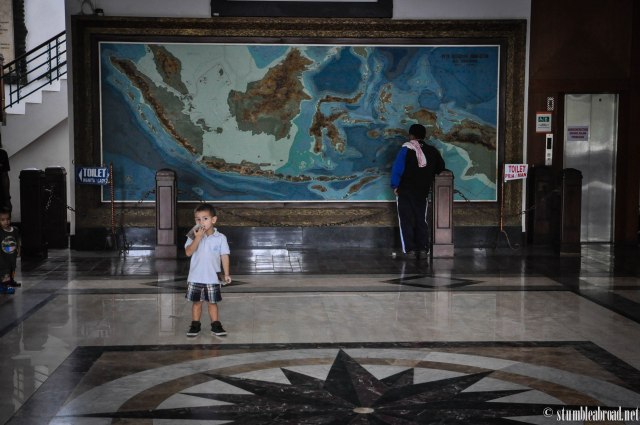 Evan with Indonesia as a backdrop

The museum has four chambers, Indonesian Geology, Fossils, Geological Resources (mainly petroleum) and Geological Benefits and Disasters. Two of the chambers, Indonesian Geology and Natural Disasters, are currently under renovation. We headed to the fossil section first. There, we found hundreds of different fossils ranging from plants and microorganisms to humongous dinosaurs and other animals. I was extremely impressed by the giant tortoise carcass and the giant ox fossil. The boys were obviously excited to see the T-rex. 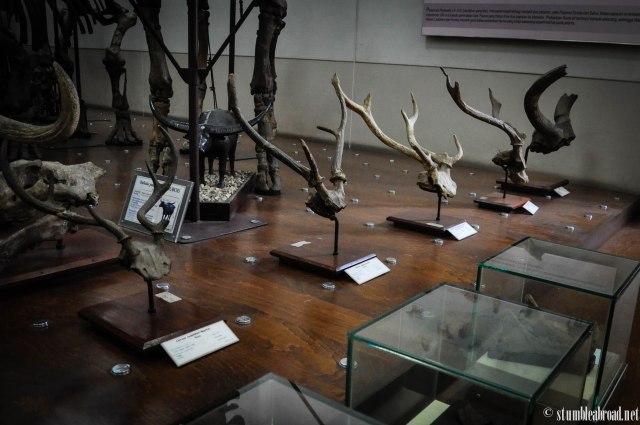 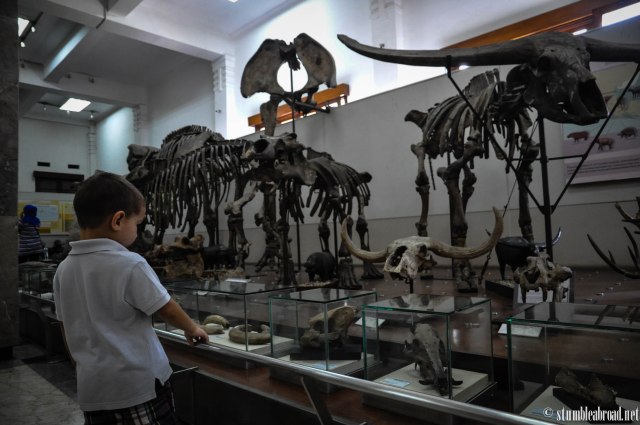 Evan loved looking at them up and close 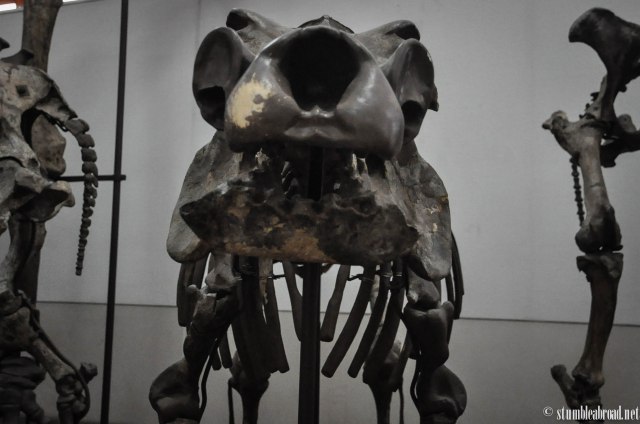 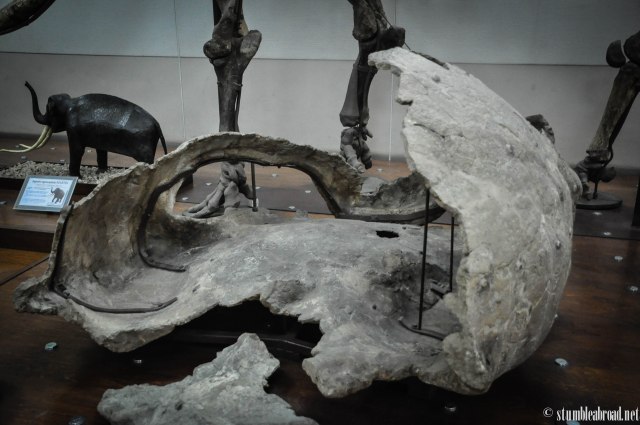 A small room in this section hosted a wide array of skulls portraying human evolution. My hubby was super happy to finally be able to see part of the Java Man which was found years ago in East Java. I found it amusing to see how the different ethos and races were portrayed and wondered if their distribution of the races was quite right, apparently half of Mexico is Mongolian and the other half Caucasian. I believe it’s more of a mix between the two rather than a division. 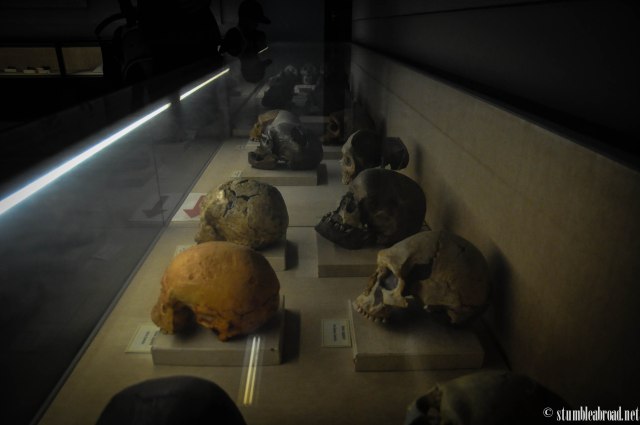 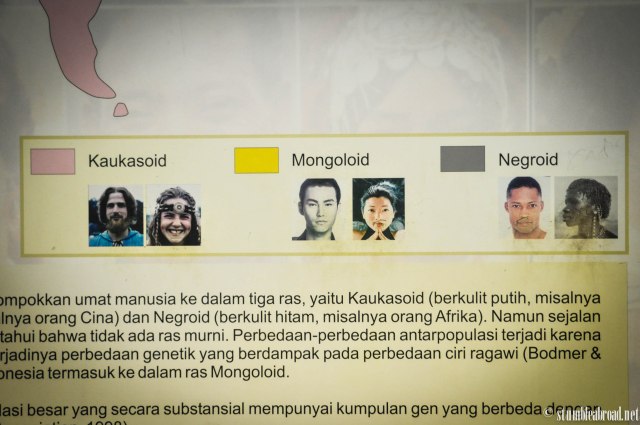 Just in case you were wondering…

A third section within the fossil area had a vast array of oceanic fossils. Seashells of all shapes and sizes as well as fish fossils filled the display cabinets. I was very impressed by the quality of the exhibitions and thought the Indonesian government has done a great job at updating this museum and keeping it current. 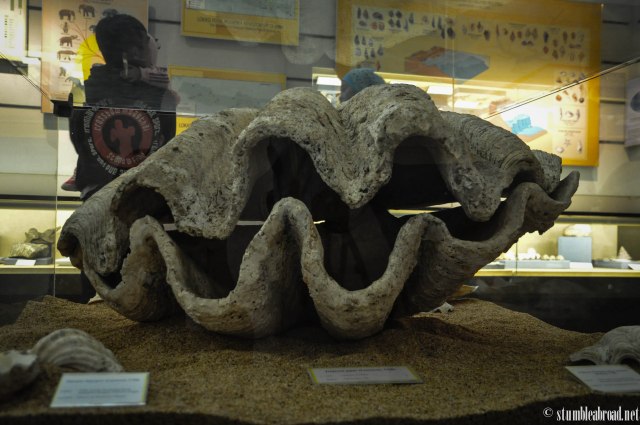 I wonder if they found any pearls in this one! 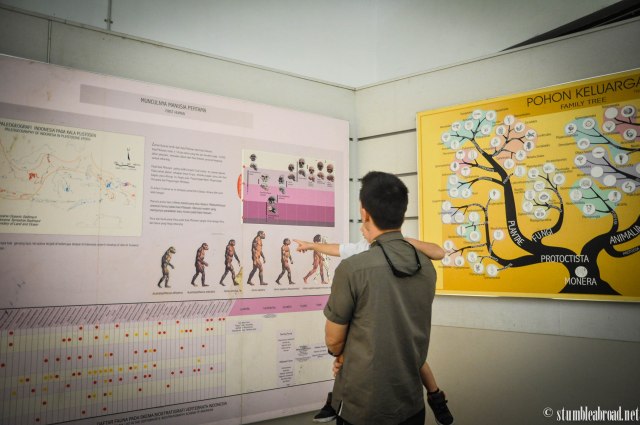 The museum was quite nice 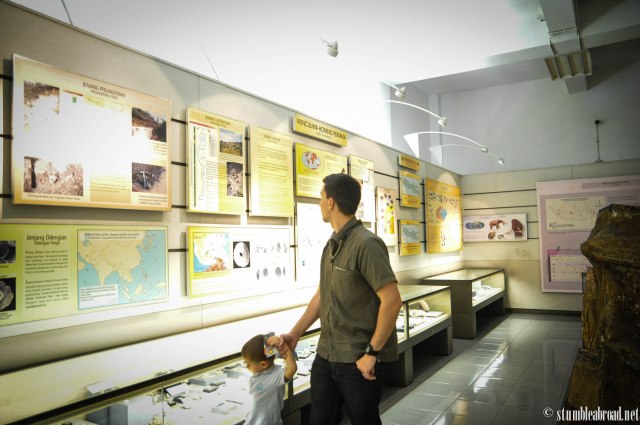 Looking at seashells and fish fossils

After walking up the stairs (not an easy feat with a stroller in tow), we proceeded to visit the geological resources area which mainly focused on petroleum science since the geological benefits and disasters section was still under renovation. 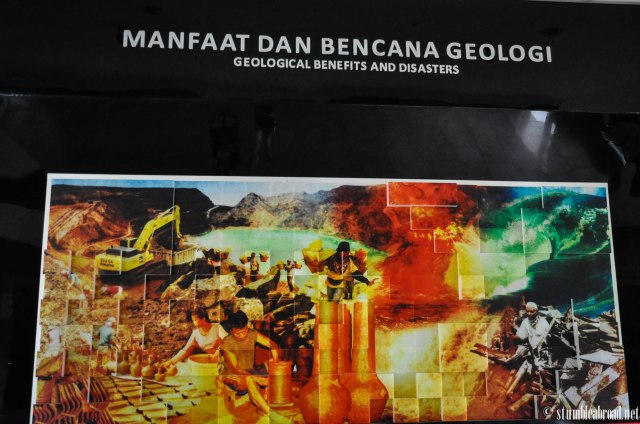 This section was still under construction

Looking at an oil platform

The geological resources exhibition was quite impressive. They had digital displays and a wonderful pieces in their cabinets. I loved how many of the sections were interactive and although all the descriptions were in bahasa they were very didactic and easy to understand. Joshua wasn’t very impressed by this section but Evan loved it! We were able to see petroleum at its different stages and even learned a thing or two about the natural resources available in Indonesia. 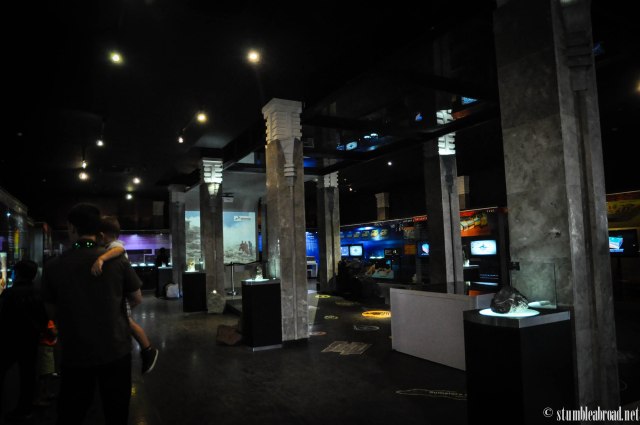 The digital displays were impressive 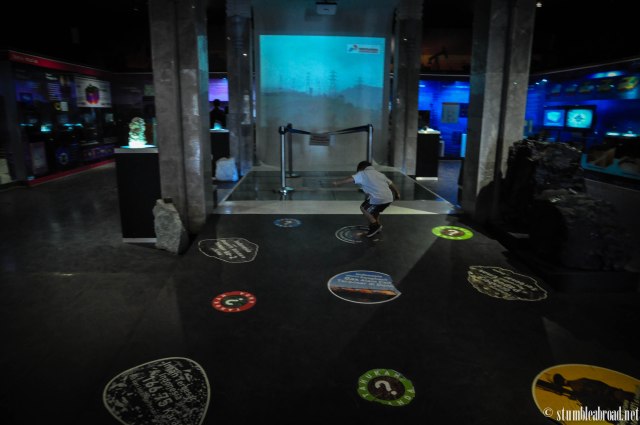 and he kept going, and going and going!

As we finished our visit to the Geology Museum we were a bit tired but ready to explore Bandung even further. The boys player a bit outside the museum where huge mineral rocks were on display. A fossil excavation section is still under constructions but it seems like it’s going to be tons of fun. 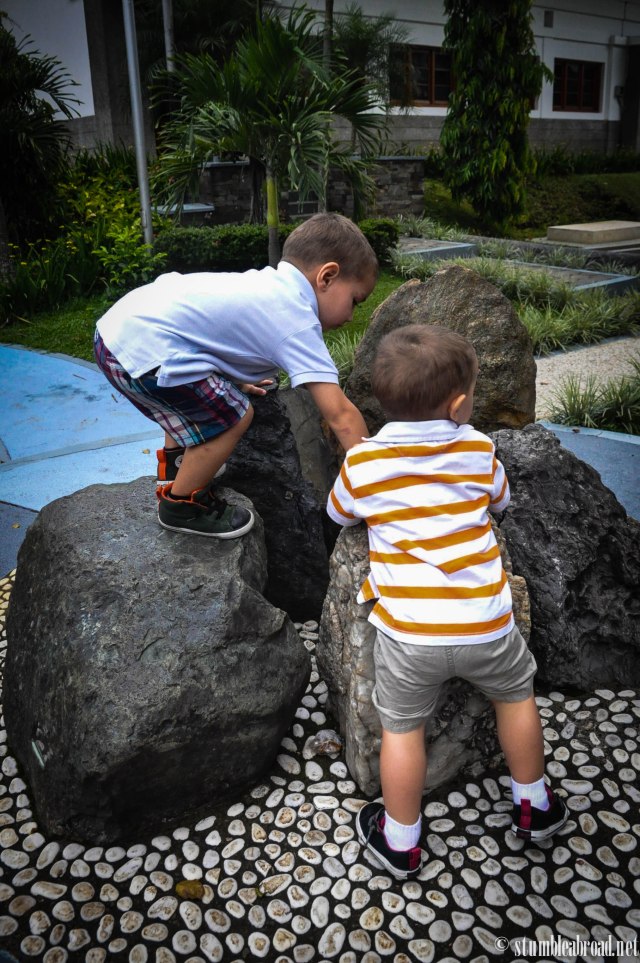 Atop a granite rock

Visiting the Museum Geologi made our trip to Bandung  a success. Although this isn’t as big as the Natural History Museum we visited in Frankfurt last year, this place was totally worht the visit. If you have little paleontologists at home I would encourage you to make the trip here and enjoy a few hours at this nice museum.