We’re halfway thru our trip in Surabaya. So far I can say we’ve had a great time despite the temporary setbacks that having a toddler and an infant in the same room entail.  Most of the time I’ve been by myself with the kids as my husband has been working 7-6 every day. Thank God for the weekend!

Without further ado, here are the first impressions and revelations of surviving traveling with a toddler and an infant in tow in a strange but yet somewhat familiar place.

The Toddler can become your best ally and partner in crime

Evan was a champ and helped me at the airport and on the airplane. If he felt like he “was in charge” he would be very eager to help “push” the stroller, hand the tickets at the counters at the airport and museums and make sure the baby and mama where right by him. Evan rose up to the occasion and fulfilled his big brother duties flawlessly (until he decided he was tired of being good and succumbed to the temptation of the terrible two’s).

It’s amazing how children enjoy everything! We should learn that from them. Evan enjoys every single thing we do. From the bumpy taxi ride to looking at animals at a zoo and sitting in the middle of a king-size bed and watching TV. I thought Josh would not be very aware of his surroundings or what was going on, however he smiled and babbled at the animals at the zoo, he loved looking out the window when we were riding on a car and interacted with every single person that smiled at him. 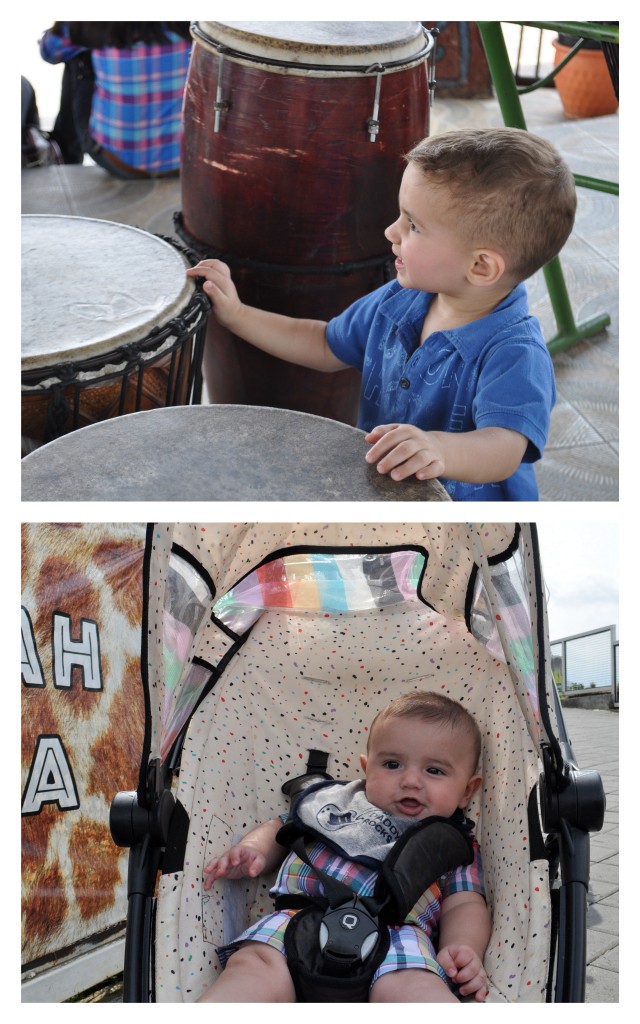 Although we spend a lot of time together at home, nothing compares to being in the same room with the two of them. At home Evan usually hangs out in his room and plays with his toys and here he doesn’t have much of an option other than playing with mama and baby brother. Although Joshua doesn’t play much with Evan yet, he loves watching his every move and I think this is the foundation of a great relationship between the two.

Getting both the boys to nap at the same time was quite a challenge. It happened maybe twice during the trip. However, it’s like their body clocks are in sync because as soon as one was hungry, the other started screaming for food as I was feeding the former. Same thing with diapers. As soon as one dirtied his diaper, the other decided it was a good time to do the same, usually while we were out.

After a few days following the same schedule: saying bye to daddy, taking baths, breakfast at the restaurant, a walk around the pool, and then going back to the room to see what to do that day, the routine started getting boring, especially for Evan. I tried to take them out as much as possible but referring to the former point, I didn’t want to wake them up from their naps to change the scenery. Evan got so bored that he hid Joshua’s blanket in the mini-bar and I couldn’t find it. On another occasion he threw his blanket in the bathtub and turned the water on.

To tell you the truth, this wasn’t so bad. Originally I had the Baby Bjorn and the stroller but an 18-pound baby was too much to carry on my chest so I chose to let Evan walk and put Josh in the stroller. Evan was great at walking, the problem was when they both fell asleep. There was no way for me to be able to hold them both at the same time. I was so grateful for great hotel staff that would help me carry Evan into the room when he fell asleep riding the taxis.

…in a tiny hotel room, at the zoo, at the mall. Need I say more? A few times Evan was able to use the toilet, but not all the time. I’m sure the housekeeping staff got sick of me calling them a few times a day asking them to pick up the trash. In some places in Asia you will find amazing rooms created especially for moms to nurse and change their babies, Surabaya is not one of those places. A few times I had to change them on the floor. Thankfully I have a diaper bag with changing pad that folds out of it (more on the best baby gear for travel soon).

From sweat, spit-up and whatever on earth they were eating or playing with that day. I brought enough clothes to last me thru the whole trip, however I was not contemplating that toddlers love to get dirty and it’s in the infant’s nature to do so. So I had to wash clothes, in a tiny bathroom sink because just putting them back in the suitcase would entail a very stinky baggage and probably ruined clothes.

I don’t know about your kids, but mine are very attached to their feeding schedule and even more to their regular menu. Joshua is easy as he only drinks formula and eats bananas. That’s simple enough to find, although mashing and feeding bananas is not as fun as it is at home where we have a high chair and lots of kitchen utensils. Add to that having to wash everything in a bathroom sink. The biggest challenge is feeding the toddler. Evan is a very good eater at home but when he’s out of his comfort zone he will refuse to eat anything new and even the food he eats at home. I have found a couple of things he will eat no matter what, but what used to be a very balanced meal schedule is now filled with lots of milk, apples, rice, friend chicken and noodle cups.

So there it is, I said it. It’s not easy to travel with the boys but it is definitely worth it. Stay tuned for the best baby gear for traveling and Part II of the good the bad and the ugly with tips on how to handle your little angels while traveling and staying sane in the process.

5 thoughts on “Traveling with a Toddler and an Infant Part I: the Good the Bad and the Ugly”