During our last trip to Bali we decided to get off the beaten path and try our luck visiting the wonders of East Bali. Boy were we in for a treat. Not only did we find a gorgeous palace that belonged to a Balinese royal family but we discovered a totally different palace, one centered on water.

As we arrived in the Tirta Gangga Water Palace we couldn’t believe our eyes. This fabulous water palace was intact and every structure and statue looked like it had been there for years but was still in pristine condition. A wonderful maze in the middle of the water drew us in and within minutes we were in the middle of a koi pond surrounded by hundreds of humungous little aquatic creatures. 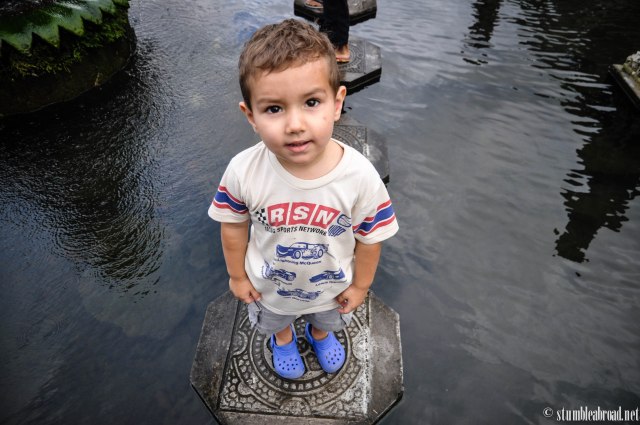 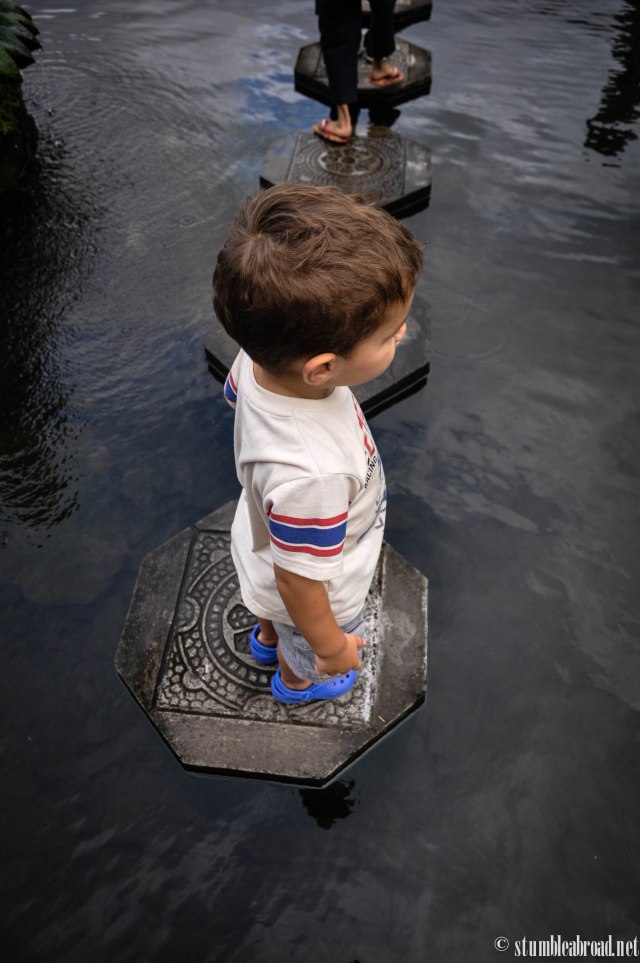 Not sure where to go next.

During the first few minutes in this water “maze” Evan was not sure where to go. He would not let go of my hand and prefer ed to be held. After I encouraged him to jump right in, he started almost running from stone to stone. I almost had a heart attack but I thought the worst that could happen would be him joining the koi fish for a few strokes. 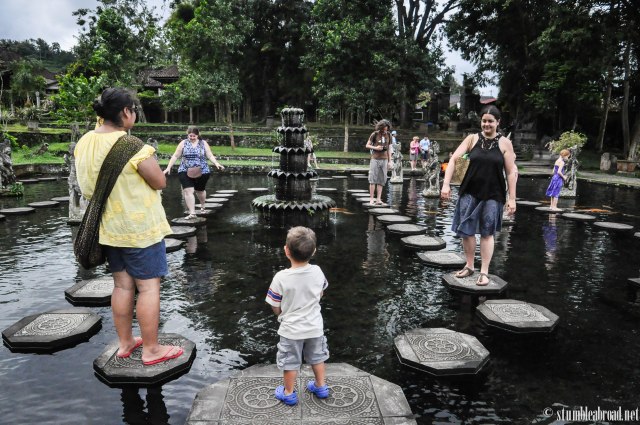 Josh was seemingly uninterested in the maze but was mesmerized by the swimming koi fish. I wish I had taken a picture of them. They were H.U.G.E.! I don’t think I’ve ever seen so many different colors of Koi fish. They varied from a dark blue hue and ebony to a shimmering pearly white with orange specks and an overwhelmingly bright tangerine shade.

As we enjoyed walking thru the lush green gardens we approached a big temple inspired pool. We later learned that these used to be royal baths and that some believed that the water had healing properties since it ebbs from a natural spring in the mountains. We saw a few locals swimming in the chilly water and pondered upon the thrill and chill that swimming in that water would be.

Considering the fact that we didn’t know whether we would have the opportunity to come back to East Bali, our dilemma weighed in favor of the frigid swim and without a second thought we jumped right in. The boys were so excited to swim despite the temperature. The water was crisp and immaculate. It was so clear that you could see tiny baby fish swimming at the bottom of the water. 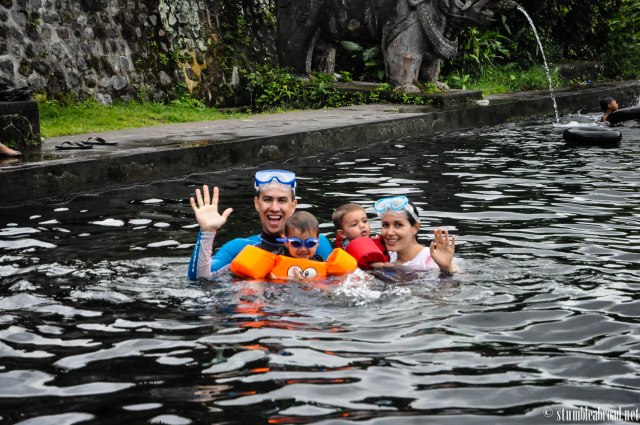 Swimming in the temple.

Ever since Evan had seen us studying for our dive certificate he grew very intently interested in learning about fish. He wanted to know the names and shapes of different species and we thought this would be the perfect opportunity for him to give it a try. Evan put his goggles on and started observing the little aquatic creatures. He was super excited to see the different fish but wasn’t too keen on the crustaceans. As soon as he saw a baby crab, he started swimming the opposite direction.

Evan was looking at the fish at the bottom.

Kids playing in the water.

Although we didn’t spend more than 40 minutes splashing around we savored every second. We had such a good time just swimming around that we forgot all about the curvy car ride to the palace.

Evan was such a swim pro!

After splashing around for a while we were ready for a break and to nurture our bodies. We found several restaurants nearby and decided to eat at a small and rustic place. We had to wait for a long while for our food to be ready but it was oh so good! Everything was fresh and made from scratch. As we were waiting for our meal the boys made new friends with the family of the restaurant owners. How lucky are these boys to be able to make friends all over the world? 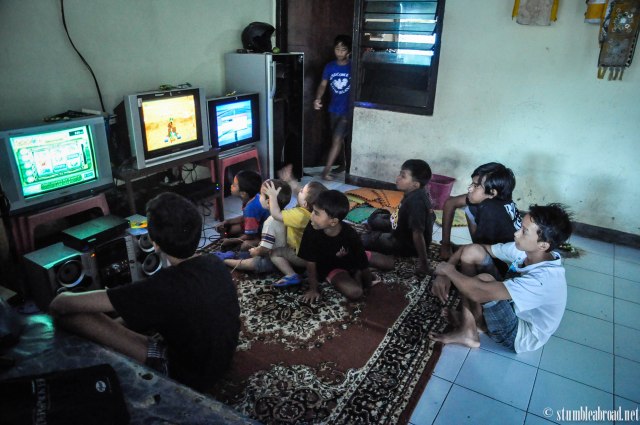 Evan and Josh hanging out with some new friends.

The Tirta Gangga Water Palace is a sight worth not missing. Although it is a bit out of the regular tourist agenda, if you are in East Bali it is a must see. The boys had a great time swimming and splashing around and I just enjoyed being surrounded by gorgeous natural environs. I really hope to go back.

1. Bring a bathing suit, you won’t regret swimming in the palace. It is an incredible experience. For ladies, a rash guard is a good idea. Both due to the temperature and for respect to the locals. I swam with a cotton shirt  on top of my bathing suit and it wasn’t the most comfortable of attires.

2. Modest changing rooms and toilets are available on site. Bring a towel and a change of clothes.

3. There are several restaurants just outside the temple. There is a restaurant avaiable inside as well but it is a bit pricier.

4. If you are looking for  a place to stay, consider spending the night at the palace. They have a small hotel on site.

5. There are some souvenir shops available nearby but the variety is not very ample. For souvenir shopping, Ubud is the best place.