Children are a heritage from the Lord,

offspring a reward from him.

What a blessing it has been to celebrate Joshua’s first birthday. Now that he is taking his first steps I realize, once again, that time flies by and that every step he takes is another step towards his independence. For now, I just want to embrace his babyness and hold him as long as I can even if my back hurts and he decides biting my shoulder is the coolest hobby.

I know everybody says that first birthdays are more for the parents than for the kids but I can tell you that both Evan and Joshua have enjoyed their parties to the fullest and that we just love throwing parties. Evan’s first birthday was a big bash with a construction theme. His second birhtday was much smaller and we opted to celebrate Ka-Chow style with a Cars 2 party theme.

For Joshua’s first birthday we opted for a nautical theme. As soon as I started ‘pinteresting‘ ideas I got overwhelmed with the thought of not being able to get everything we needed here in Jakarta. I even considered getting  a party planner, but it was too pricey and to be honest I love making things myself. So we endeavored in the planning and making of my baby’s birthday.

Disclaimer: Since I’m terrible at taking pictures of parties, some of the photos are really bad quality because they are from my phone. My very good friend Kaho from Chuzai Living was very kind to take some excellent pictures of the party and you will see her name credited under those really good pictures.

Since the function room at our apartment building is overly ornate we didn’t want to overwhelm it with decor (besides I didn’t have the time or energy to do it). We had a few streamers, some banners, lots of balloons and some nautical toys to decorate. Part of the decor were an antique steering wheel set on a base and a cardboard boat which doubled as entertainment. 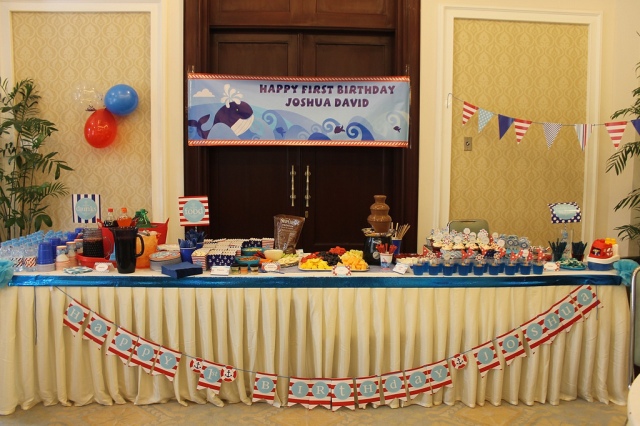 The Food Table (Image by Kaho) 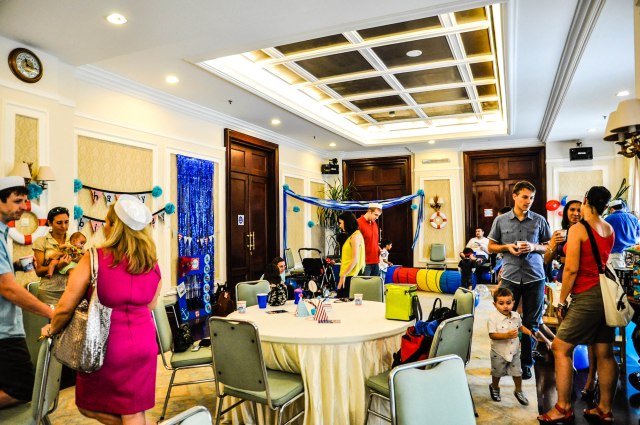 The Spread (Photo by Kaho)

The highlight of the decoration, and workload, was the paper party package I got from Totful memories. The colors and the theme were spot-on and the details looked very cute. My personal favorites were the water-bottle and chocolate labels and the personalized signs we used all over the party room. 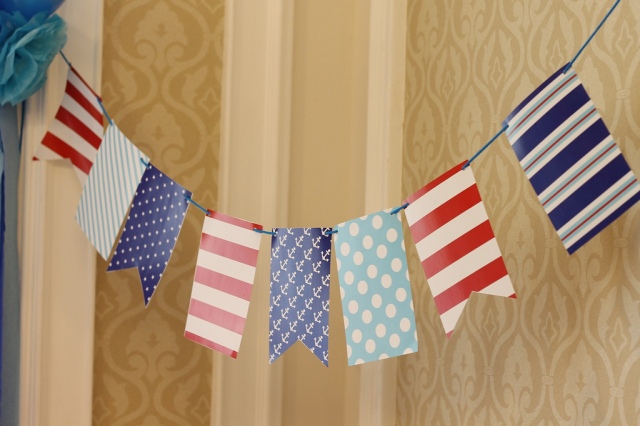 Thanks to Oriental Trading we were able to pick up some cute sailor themed party plates, a banner, sailor hats, life-saver wall decorations, popcorn holders and colored streamers and balloons. We also bought some party favors and candy from them. For the party favors we chose miniature Chinese take-out boxes and we added a few candies (mostly for the parents of the babies), rubber duckies with pirate costumes and some silly bandz.

To be honest I didn’t realize I had to make decorations for the tables so last minute I grabbed a couple of toy boats, some pipe-cleaner and just put them on the tables. We also had the party hats and the sailor hats so they didn’t look too empty.

Sailor Hats for the guests

Nothing too fancy but everything kid-friendly and fun. The main dishes were a shepherd’s pie and a vegetarian lasagna. We had a fruits and veggies as well as pretzels and popcorn to snack on. For dessert of course we had cupcakes, jello,  a chocolate fountain with fruits and marshmallows and a candy bar that included blue-wrapped kisses, blue licorice, blueberry gummy sharks and red candy covered chocolates.

The Food Table (Image by Kaho) 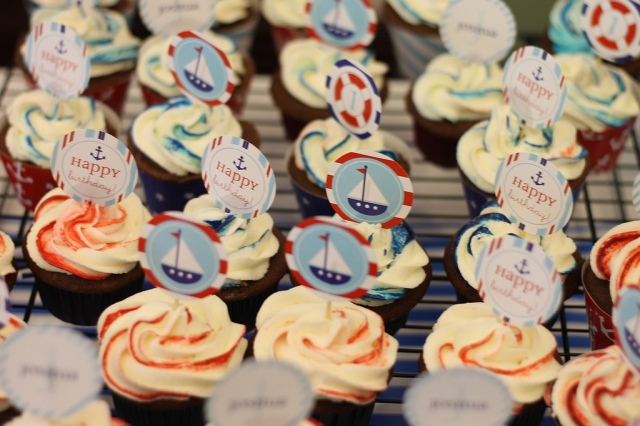 A couple of fun details were the blue jello with “sailboats” made out of oranges and popcorn cups that actually where the first to cease to exist.

We usually like having (and making) pinatas at our parties but since we didn’t know if the apartment building would allow it we opted for a cardboard boat instead. Boy are we glad we did. It was the hit of the party and it was a lot of fun for the boys to “help” daddy make the boat out of cardboard boxes.  I bought an old steering wheel at an antique shop and daddy set it on wood. 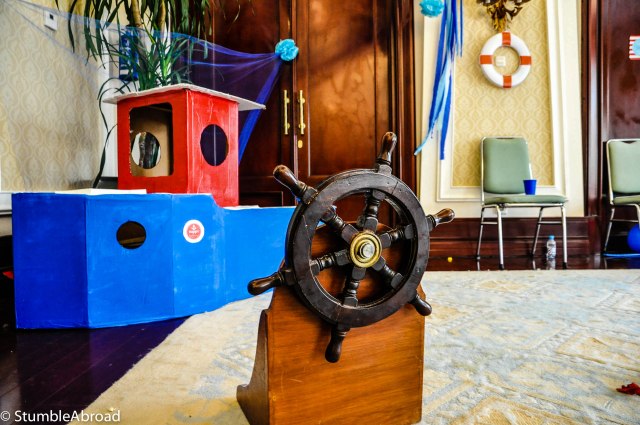 We made the boat and bought the steering wheel at an antique shop. Daddy set it on wood. 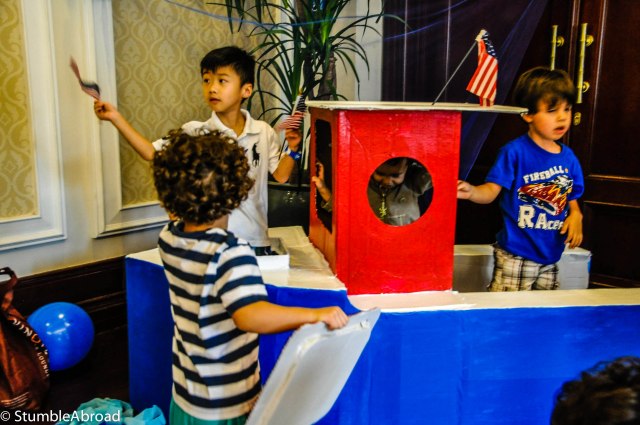 Fun playing with the boat 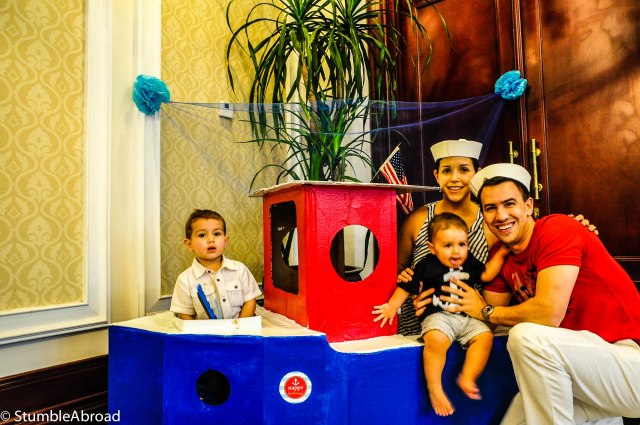 Since most of the kids were quite young we opted to put a playmat on the floor and my good friend Nazira let me borrow her son’s ball pit. For the older kids we set up coloring pages on a table and we had some of Evan’s toys available to them.

The play area (Photo by Kaho) 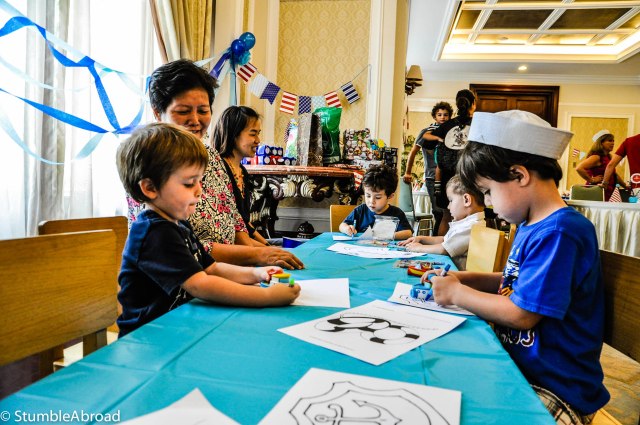 Joaquin in the Tunnel

We also set up a sort of photobooth that both parents and kids enjoyed. It was a very simple plastic board frame that my friend Priscilla helped me decorate while she visited. We added a few fish in a net, rosettes and some party signs from the totful memories party package. We also set up the steering wheel for kids to take pictures with and it was quite popular. (In fact it still is) 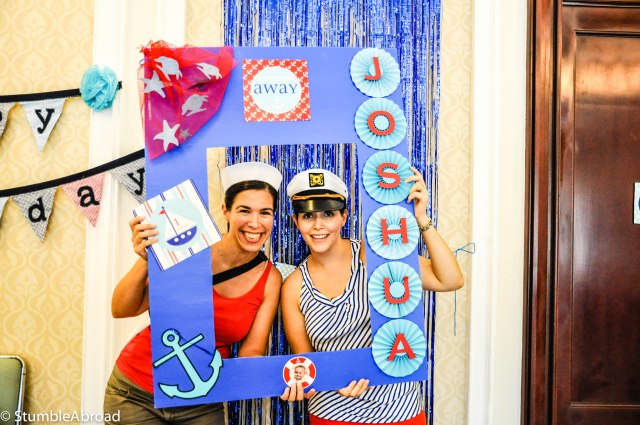 With my good friend Maria.

Josh loved playing with the wheel. 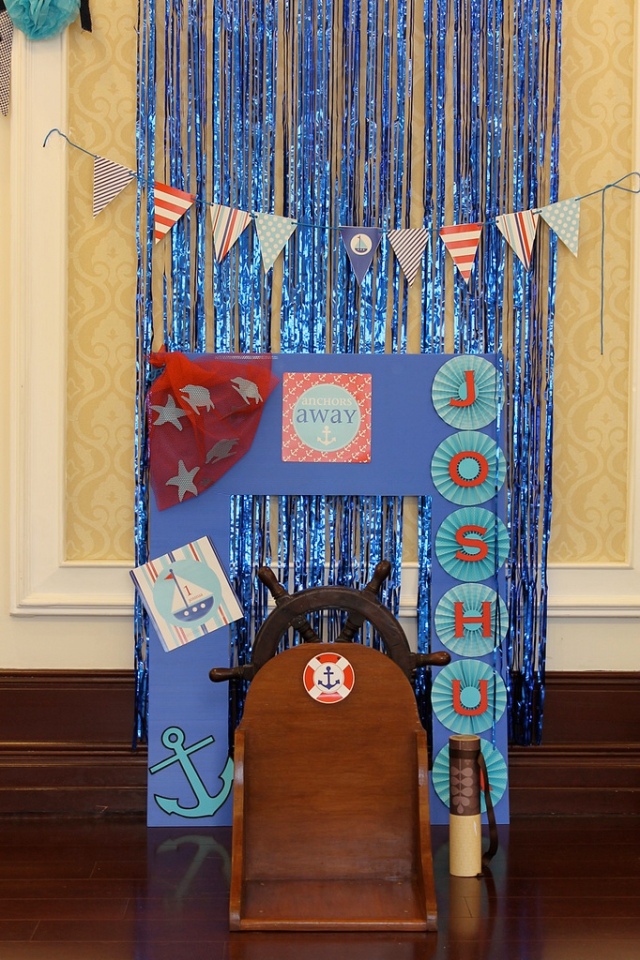 We had a blast celebrating our Joshua and are very blessed to share his first birthday in Jakarta with all of you! 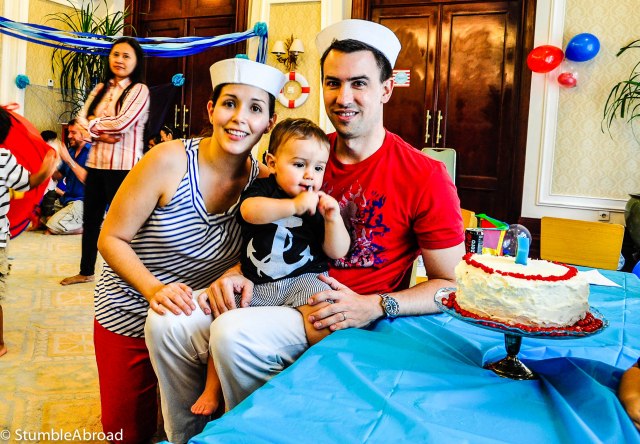 Josh was very grateful for all the cool presents. 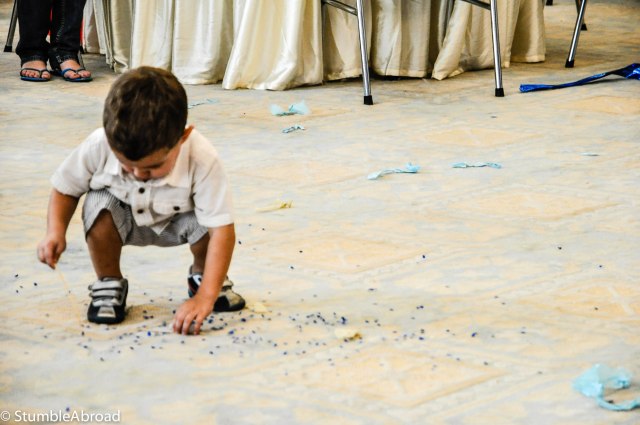 Picking the confetti up 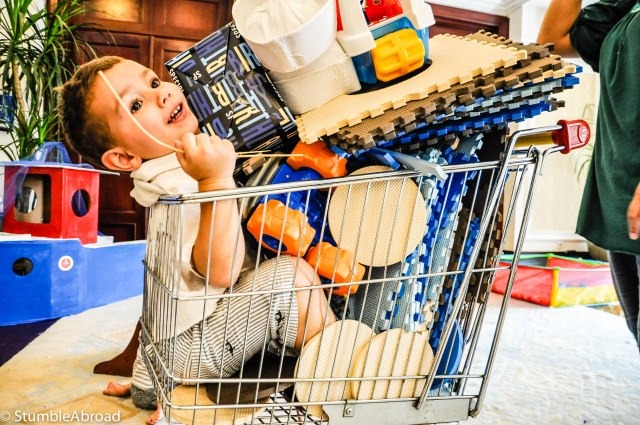 Until next year! Or actually, next month as we are preparing Evan’s Blast Off to Space 3rd Birthday Party!