Every good and perfect gift is from above,

coming down from the Father of the heavenly lights,

Our children are out biggest gift from God. I can’t believe I’m a mom to two healthy young boys and I am so blessed to share my life with an amazing man and two cute toddlers. The time has come again to celebrate the birthday of our firstborn, Evan. I can’t believe how fast time has flown by and although it sounds cliche it is so very true. I still remember those first few days holding my newborn. I was so scared to even give him a bath that my husband had to take over it for the first few weeks of his life.

Now Evan is young three year old boy and I am so proud of who he is becoming. My baby is becoming a little boy who is not only independent but very kind and caring of his brother and family. As Evan slowly but surely steps out of his baby years I can’t do anything but be grateful for the years that have passed and the years to come. My young boy has taught me so many life lessons and my heart is just bursting with joy whenever I talk about him.

For Evan’s third birthday we decided to throw a Space themed party. Lately, Evan has been obsessed with rocket ships and it just seemed like the perfect theme for a three year old. Ever since we started preparing Joshua’s Nautical Party Evan started asking if the preparations were for his party. I had to keep telling him every few days that we would celebrate Joshua’s birthday, then we would celebrate Christmas and then we would have his “rocketship party”.

I was very lucky to have my sister come visit. She helped me prepare everything for the party and we had a great time making the decor and getting everything ready for the big day. Every time Evan saw us working on something he asked if it was for his rocketship party and he made sure all of his little friends knew he was having a rocketship party soon. I was so excited to see Evan so into party mode since we definitely love throwing parties. I don’t think he was as excited about his first and second birthday party as he was for this one. Surely enough then time came for Evan’s birthday party to finally arrive so we suited up in our Astronaut suits and got ready to blast off into space.

Here are some details of Evan’s Blastoff to Space Third Birthday Party.

For this party we opted for a blue, red and silver color scheme. A lot of the decorations were home-made including the rocketships for the center pieces. Some of the decor I got from Oriental Trading and the rest we basically re-used or recycled from my ever expanding party supply box. I purchased the printable party set from Printastic Design. Leah is an amazing graphic designer and her space rocket party was perfect for Evan’s birthday! 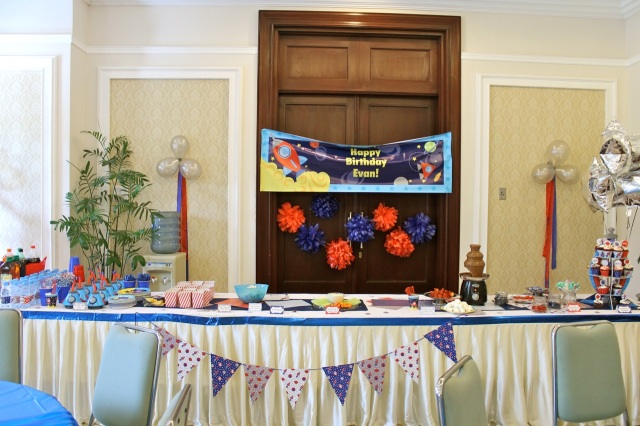 The Spread (Photo by Kaho)

We had a photobooth with an astronaut on one of the corners. The kids loved taking pictures behind it and it looked really cute.

We had an arts and crafts kiddy table and above it we had inflatable rubber planets and an astronaut. Please excuse the order of the planets since I realized I just put them in the wrong order after I got off the ladder. I will have to freshen up on my astronomy lessons before I do this again next time! 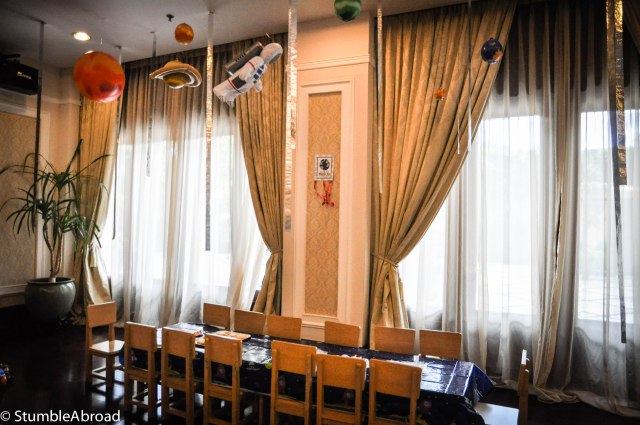 Craft Table and Astronaut floating above

For the centerpieces my sister Dany made cardboard rocketships and wrapped them in sparkling paper and fabric we got at Pasar Majestic. I was very lucky to have found tons of cute fabric for cheap since I bought several pieces of scrap fabric that could no longer be sold by the meter (score!). We had star balloons filled with helium and different metallic containers filled with Hershey’s kisses.

I reused the fabric banner I had made for Evan’s First Birthday. I really love it and I think I will keep on using it for years to come. My sister brought a Solar System kit that was the perfect centerpiece for the gift and goody bag table although it ended up becoming another toy for the kids by the end of the party. 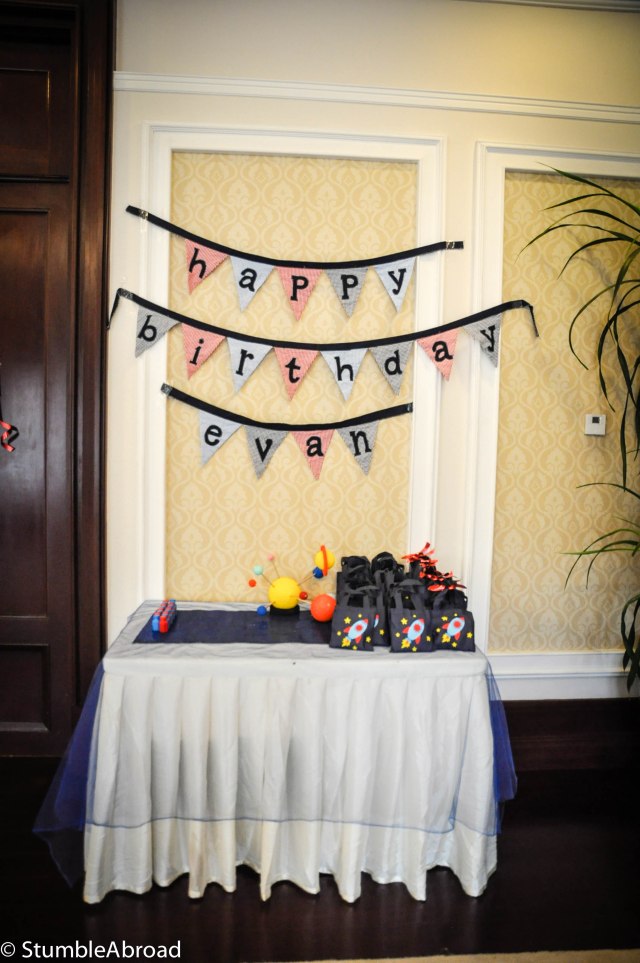 The goody bags were very simple fabric bags that I got from OT. They included candy (including some spicy Mexican sweets), stickers, a rocket stamp for the older kids and a rubber ducky for the little ones. 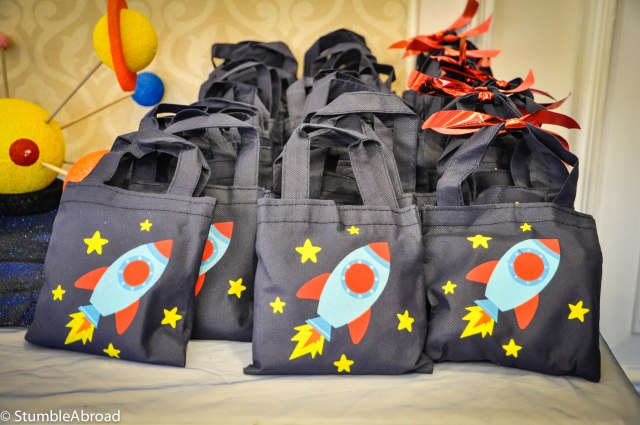 The highlight of the party was the cardboard rocketship daddy made. He basically recycled the cardboard from the boat at Joshua’s party and re-purposed it to make an awesome rocketship. He was inspired to make this in resemblance to the Star Wars Snow Speeder. I’m not SW savvy but I think he did a great job and the kids loved it! 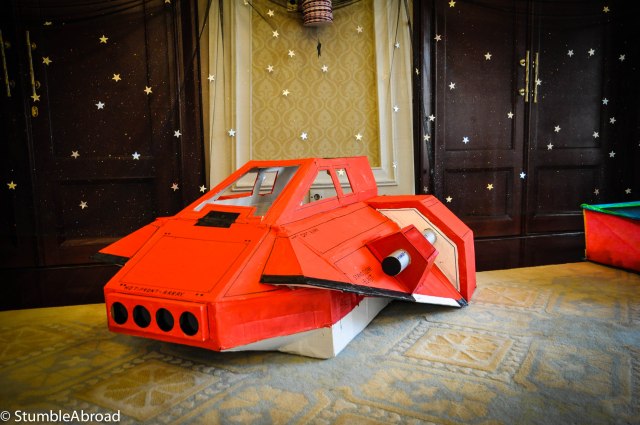 Another view of the Spaceship

The main guests were picky toddlers so we tried to make a very simple menu.

For drinks we had sangria for the parents and juices and water for the kids. I absolutely fell in love with the Space Tumblers on OT so I bought a few for our guests to take with them.

We had a very assorted sweet section which included a chocolate fountain with strawberries and marshmallows, cupcakes and a Candy Bar.

I considered organizing a “space mission” for the kids to follow but at the end we decided against it because I thought that if any of our guests have kids similar to Evan they would have gotten bored or distracted within minutes. So we just let the kids be kids and had enough toys for them to play with. My good friend Nazira let me borrow her ball pit and between that, the tunnel and the spaceship the kids kept themselves entertained for a while.

The Spaceship was very popular

We also had an arts and crafts table with cookies with icing to decorate. Even though some of the kids just ate the cookies (or the icing) this was a great activity that both the youngest and oldest of the kids enjoyed. I usually make my own icing but decided against it this time since royal icing can get very messy and I still had some store-bought icing at home.

Kids having fun on the craft table

The second activity on the crafting table consisted of build-your-own space shuttle foam gliders and a spaceship to be colored. The gliders were a hit among the boys in particular and a lot of the girls enjoyed coloring their spaceships. 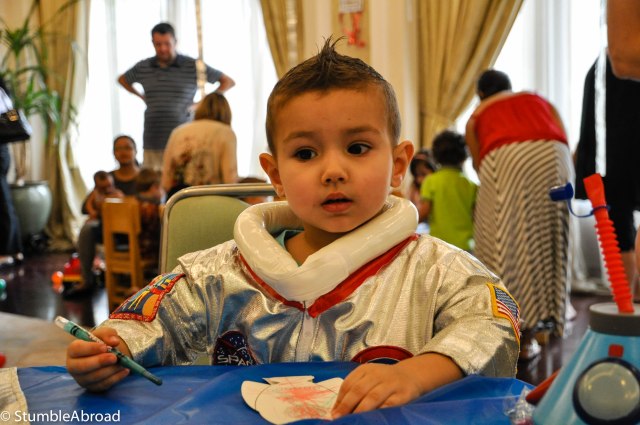 Birthday Boy in his Space Suit

Joshua was having fun, too

For the cake I made three very simple rocketships and decorated them with buttercream icing and MnMs. We had tons of candles for Evan because he just loves blowing candles. As we sang Happy Birthday I was just so grateful for this third year with my little boy. 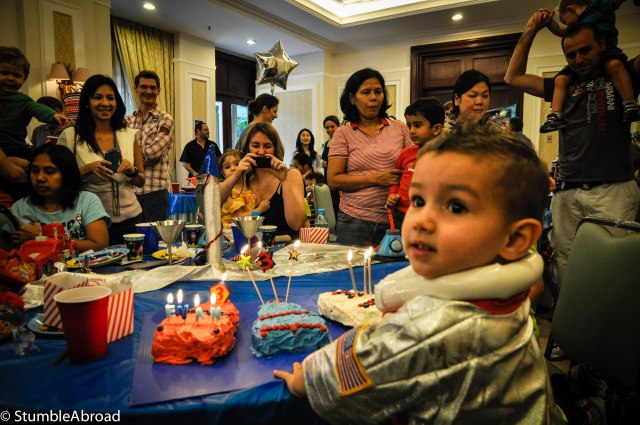 We had tons of candles since the boy loves blowing them 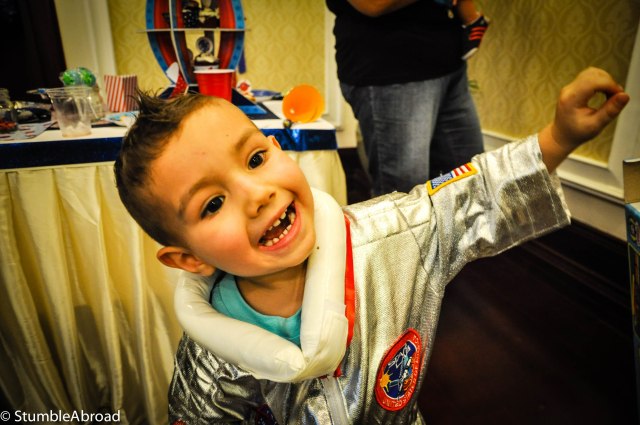 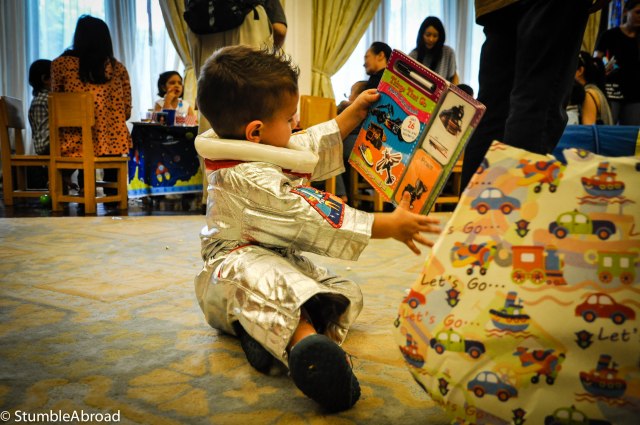 Evan couldn’t resist temptation and started opening some presents. I was quite surprised he kept his suit on until the end of the party!

Thanks for joining us and see you next time!

To Infinity and Beyond!

Evan had a blast (Photo by Kaho)

For more detailed photos of the party check out my friend Kaho’s blog. She was very kind to write a wonderful post about the party and took some gorgeous pictures.