Today, Joshua is turning 6 months old. I can’t believe time has flown by so fast and my little baby is already rolling all over the place and about to start crawling. As I’ve mentioned before here, we thought Joshua was a Sophia, Christmas stocking, ruffled pants and all. I had left Jakarta with a very pink nursery and I was planning to buy the finishing touches in the US.

Joshua working on crawling. He moves about rolling side to side but is yet to figure out that moving forward might prove more convenient.

With a toddler and an infant at home alongside all my responsibilities at the different associations I work for, the transformation of the nursery into a macho man one has been the slowest in the history of me. When I thought we were having a girl the room was practically ready within 4 weeks. I had modified the sheets from the bedding set we bought to fit our oval-shaped crib, I had made special pillows for the queen bed in the room and I had even made special covers for the drawers on the changing table. Honestly I hadn’t been motivated to find a new theme and it was easy enough to use Evan’s old stuff until I figured out what I wanted to do.  Until yesterday, Joshua’s room had pink curtains.

Today, we finally changed the pink curtains to yellow and we are slowly working on transforming my lil’ man’s room into the nursery he deserves. I hope to finish the nursery in the next few weeks and on the mean time I just have to show you the super cute fabric banners and robots I had made with Strawberry Patch for Joshua and Evan’s room.

I was initially introduced to Strawberry Patch at one of the many bazaars different associations hold on a seasonal basis. I had honestly forgotten about all the cute stuff they make until recently when I saw an ad for an upcoming bazaar and on the ad I saw the picture of a fabric robot and a name banner. I had already ordered the bedding for Joshua’s room so I thought the fabric robot would add a nice finishing touch.

I immediately contacted Ayu, the owner and designer of Strawberry Patch and asked her if she could custom-make a robot that would match the colors of the bedding as well as a flag banner and a name banner. She was just so awesome that she even sent me samples of the fabric she had and made a nice little collage with the colors she thought matched the bedding.

Ayu kept sending me updates and previews of the work being done and two weeks later everything was ready for me to pick up. I came over to her workshop and met a couple of lovely ladies arduously working on finishing some pieces for their upcoming bazaar. I’m no sewing expert (obviously =P), but I could tell the quality was great and I’m looking forward to getting some more cute pieces made either for the boys’ rooms or for gift-giving.

Here are some photos of the banners and robot in Evan’s room.

And the big reveal, a preview of Joshua’s unfinished, but at least manly, nursery. I hope to post some photos and details of Joshua’s room when the bedding finally gets here and I can say I’m done with both boys’ rooms. 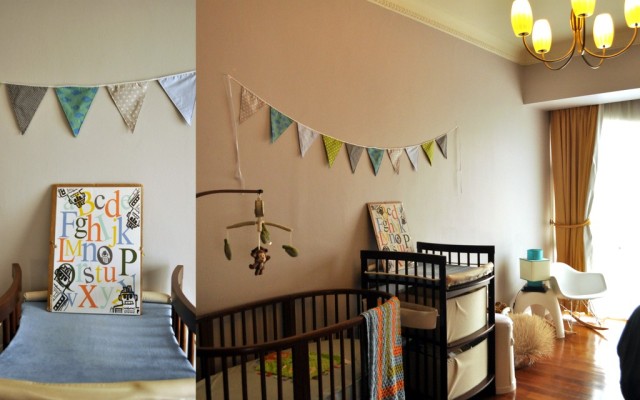 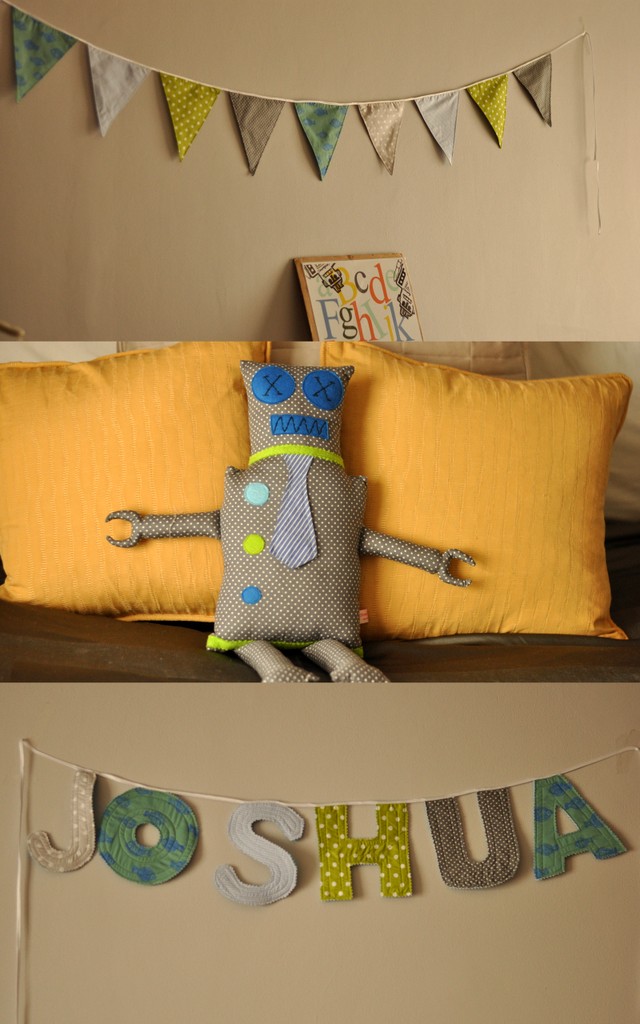